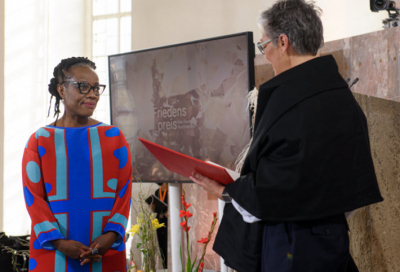 Zimbabwean author and filmmaker Tsitsi Dangarembga was honored with the Peace Prize of the German Book Trade.

Dangarembga is "a widely audible voice of Africa in contemporary literature," the jury said in its statement.

The 62-year-old was honored for her artistic work, but also for her political commitment. She has been fighting for freedom and against corruption for years and has to answer for this in court.

In her acceptance speech, she called for overcoming old hierarchical thought patterns, also with the help of language.

"The solution is to undo the racialize and other hierarchical modes of thinking based on demographics such as gender, sex, religion, nationality and class. And any other that were and continue to be the building blocks of empire throughout history and throughout the world," she said.

In her trilogy of novels, Tsitsi Dangarembga uses the example of an adolescent woman to describe the struggle for the right to a decent life and female self-determination in Zimbabwe. Her debut novel, "Nervous Conditions," published in 1988, was included by the BBC in 2018 in its list of the 100 most important books that have shaped the world.

The 1993 film "Neria," for which she wrote the story, is one of the most popular films in Zimbabwe.

Her new novel "This Mournable Body" was nominated for the shortlist of the Booker Prize in 2020. In addition to her work as an author and filmmaker, Tsitsi Dangarembga has been active for many years in promoting freedom and women's rights and political change in Zimbabwe.

The Peace Prize of the German Book Trade, which has been awarded since 1950, is one of Germany's most important awards, worth 25,000 euros. With it, the German Publishers and Booksellers Association honors a personality who has contributed to the realization of the idea of peace.