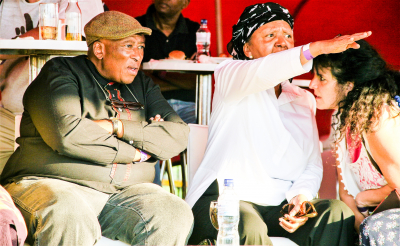 "Poli poli, tell me true. Is he coming today? Poli poli, if you give me one little hint about the day, I will let you fly away. Poli poli, it is my grandmother I want to see happy. Please take a message to him. Tell him we love him dearly. Poli poli, tell him all will be forgiven if he comes home."

A young girl left in the care of her maternal grandmother in the coal mining township of KwaGuqa implored of a ladybird which had landed on her neck whilst waiting in the garden of her adopted home for a long anticipated visitor, on a late Sunday in mid-20 th century South Africa. The moment promised a great family re-union betwixt the hostesses and the visitor – a prodigal son of the elderly female in the household. They had spared nothing for the welcome, with the humble abode’s front table laid with a dinner set and its kitchen wafting inviting and appetizing aromas of chicken, beef stew with dumplings, rice, pumpkin, sweet potatoes, green beans and all the favourite treats prepared for special occasions!

The visitor, a popular soccer player lauded by fans through the chant, "Solomon Slow, son of a Scottish gentleman!", but otherwise named, Khalo, hadn’t been home in aeons after an unceremonious separation which involved his inamorata, caused by his mother. Now, via a telegram, he had requested to pay a fleeting a visit to her after participating in a scheduled match on the day.

Although telegrams are the bane of the old lady, Ouma Johanna’s existence insofar as conveying important notifications – the mode of communication would in a short period of time from that albeit short-lived Sunday homecoming, prove to be a harbinger of unwelcome reality as, a mere month on in December 20, 1948, it announced the dreaded text: SOLOMON BOWER DEAD. CONTACT POLICE BRAKPAN.

The deceased, an uncle to the pre-teen niece who not so long ago anticipated his return back home, had been murdered allegedly by Afrikaner youths with whom he had worked at a butchery and had had altercations with for refusing to refer to them as, "baas."

This part of erstwhile South African ambassador to the US and France, Barbara Masekela’s childhood is best encapsulated in the lyrics of her late musician brother, Hugh’s moving song, Stimela, about a train which ferried migrant labourers from the African diaspora to work the mines of South Africa, as well as women hiding forbidden liquor brews in holes on grounds. At KwaGuqa, a miasma of events overwhelming for one so young, unfolded rapidly – including an incident where a duo of young female neighbours of hers who used to request that she accompany them to gather cooking wood in the forest verging the neighbourhood killed a black man, ostensibly, for interfering with them. Recalls Masekela in a chapter titled, Uncle Bower and the Men of Witbank: they show no remorse (pending their trial). No sackcloth and ashes for them; they wear their best Johannesburg fashion clothes for their court appearances.

Later on leaving KwaGuqa, Masekela then went to stay in Alexandra with her parents – dad being the Chief Health Inspector (as well as an aspiring artist who moved within the circles of the Polly Street Art Centre’s Cecil Skotnes) and mom being a politically active social worker who enrolled her in a Coloured school in order to avoid her being taught Bantu Education. Sans a birth certificate confirming that she was Coloured, Masekela’s surname was even altered to, Maskell – only reverting to the original when she went on to school at Inanda Seminary School in the then Natal. Masekela refers to the momentary alteration as, "the rape of my father’s male authority." – and described colouredism or colouredness as a delicate, if not downright offensive, subject which clings like dried glue on the dark skin of the female – who is usually the ultimate victim as she gives issue to the mixed-race child.

The names dropping in Poli Poli is impressive, with Masekela recalling that her mother, Pauline, met the renown painter, Gerard Sekoto, just before she married. "I have never fantasized about what would have happened if he had married may mother," she mused. Of her father, a sculptor and calligrapher, she writes that he personally knew the likes of Ernest Mancoba, Sekoto and the sculptor, Edoardo Villa, among others. Of Nat Nakasa, Masekela mentions that the Drum magazine scribe facilitated in her finding a living room in Berea at the height of the Group Areas Act, in the house of a Jewish woman who stayed with an African actor. Her recollection of the time: I had a special 'stand-in' role to play in case of a police raid. My part was that, to avoid charges under the Immorality Act, I was to act as the maid employed by the woman and the actor as my live-in boyfriend.

More in this category: « Hauntings – a collection of stories edited by Niq Mhlongo. The book review of Lord Peter Hain's, A Pretoria Boy. »
back to top