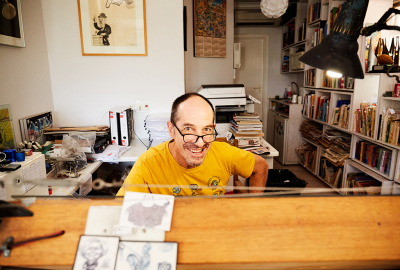 No little thorn in the flesh or irritating fly in the ointment, Zapiro just cannot be ignored.

It’s been another helluva year, and who better to make sense of it than Zapiro, cartoonist, political analyst and agent provocateur. He has the ability to knock the air out of us, to rock us back in our seats, only to force us bolt upright with a 1000-watt jolt of electrifying shock. He makes us angry; he makes us laugh and he makes us think.

In It Only Comes in Orange, Mr Zuma, Zapiro tackles the madness of the pandemic, and that the only South Africans ready for the second wave were the Covidpreneurs; then there’s Piet Rampedi’s ten little maybe babies, the mayhem of Donald Trump, the jailing of former president Showerhead – and his flat screen television revolution, amongst everything else that happened in this eerie year.

You’ll shake your head, you’ll roll your eyes, and more than anything, you’ll laugh behind your mask!

About The Author
Zapiro is Jonathan Shapiro. Born in 1958, he went through school in Cape Town, architecture at UCT, conscription, activism, detention
and a Fulbright Scholarship to New York before establishing himself as South Africa’s best-known cartoonist. He is editorial cartoonist for Daily Maverick. Previously he was published in Mail & Guardian, Sowetan, Sunday Times, Independent Newspapers and The Times. As an activist
in the 1980s, he drew for the UDF and for South (1987–88). He has published 25 best-selling annuals and four special collections. He has won numerous international and South African awards and has two honorary doctorates.

More in this category: « The book review of Lord Peter Hain's, A Pretoria Boy. Reflecting back on where it all started...Silvertone's 20th Anniversary. »
back to top