Expanded edition of Imtiaz Sooliman and the Gift of the Givers by Shafiq Morton. 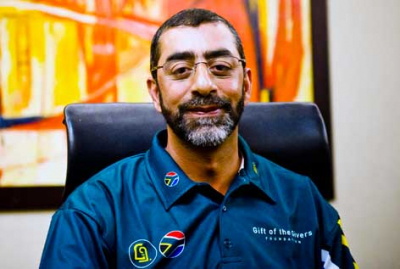 Gift of the Givers is an extraordinary South African story – 30 years of selfless service to people in need in South Africa and the world.

Imtiaz Sooliman, a medical doctor practising in Pietermaritzburg, South Africa, visited a Shaikh in Istanbul in 1992. The Sufi teacher gave him a message that would dramatically change the lives of countless people. 'To my absolute astonishment he told me I would help people for the rest of my life. He then instructed me to form a humanitarian organisation called the "Gift of the Givers", and repeated the phrase "the best among people are those who benefit mankind".

Almost 30 years later Gift of the Givers, Africa’s largest humanitarian and disaster agency, has a reputation for speedy responses to floods, war, famine, fires, tsunamis, kidnapping and earthquakes. Well known for their interventions in South African and international disasters, teams of volunteers have undertaken missions to places such as Bosnia, Palestine, Japan, Haiti, Indonesia, Malawi and Mozambique. In the last few years they have turned their attention to the poorest South Africans - they have put up hospitals, run clinics, dug wells, drilled boreholes, built houses, offered scholarships and provided shelter, food and psychological succour to millions.

Originally published in 2014, the book has been brought up to date to continue the extraordinary tale of an organisation that has become a South African legend – the first to intervene in so many devastating situations and bring hope to those who have lost everything. Gift of the Givers’ reputation for direct, honest and non-partisan solution-finding has become a beacon of hope in South Africa.

About the Author
Shafiq Morton is an award-winning photo-journalist and radio presenter. Recipient of two Vodacom awards, he received the 2012 AWQAF award for his contribution to community media. In 2020, Imtiaz Sooliman and the Gift of the Givers – A Mercy to All won the AfriCAN Awards. His radio show on Voice of the Cape has been nominated for the national MTN and Liberty Life Awards. Morton was voted amongst the 500 most influential Muslims in the world 2009-12 in the media category by the Royal Islamic Strategic Centre in Jordan.

More in this category: « Family of Liars: The Prequel to We Were Liars. Cape Town's leading fine dining Indian restaurant Bombay Brasserie is back. »
back to top