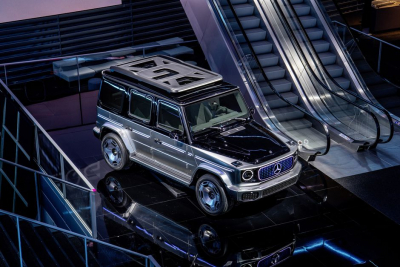 The electric version of Mercedes-Benz’s G-Class looks set to be built in Arnold Schwarzenegger’s alpine hometown.

On Sunday, Mercedes-Benz unveiled its EQG prototype, an all-electric version of the automaker’s utilitarian off-road icon. Its combustion-engine forerunner is built in Graz, Austria, by Magna International Inc, and the subcontractor’s European boss dropped a hint at the Munich car show that the electric version will be built there, too.

"We’ve built the G-Class for 41 years and we’re involved with their electric projects," Guenther Apfalter said in an interview. "We have high hopes."

When Mercedes designed the G-Class in the late 1970s, its boxy design and all-terrain capabilities were envisioned for soldiers and explorers. It largely stayed in that niche until the SUV boom vaulted the model more into to the mainstream, gaining high-profile customers including Sylvester Stallone, Kim Kardashian and Megan Fox.

While vintage in design, the G-Class is among the most expensive cars in the Mercedes range. The AMG G63 version, for example, costs about $156,450.

Whenever a production EQG does arrive, it’ll join an ever-crowded field of electric vehicles that can handle rough terrain. General Motors revived the Hummer brand and is making two all-electric versions of it: an SUV and a pickup truck. EV startup Rivian is about to launch its first pickup truck, with an SUV coming later this year. Ford has even teased that an all-electric version of its newly-revived Bronco SUV will eventually hit the road.

The G-Wagen has always been as much of a status symbol vehicle as it is about venturing off-road, though, so expect the production EQG to be loaded with all the same kinds of features that Mercedes-Benz has been rolling out in its newest, most expensive vehicles, like the EQS sedan. And if Mercedes-Benz can give the EQG the same kind of range and performance that its EQS and EQE sedans are getting on the company’s new electric vehicle platform, the electric G-Wagen could be something to behold.

More in this category: « Volkswagen to launch new Polo in South Africa in early 2022. Toyota launches Corolla and RAV4 hybrids in South Africa. »
back to top