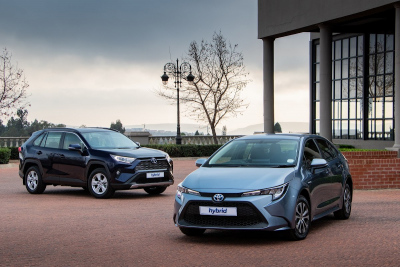 Japanese automaker Toyota has launched hybrid variants of two of its most popular passenger cars in South Africa – Corolla and RAV4.

"Both Corolla and RAV4 Hybrid are a first for South Africa, and combine all the virtues of their conventional namesakes with the added performance and fuel efficiency of Toyota’s proven hybrid system," the company said.

Hybrid is used to identify a dual-source powertrain combining a traditional internal combustion gasoline engine with a high-current electric motor.

As efficiency is the aim of the game, the petrol engine utilises many friction-reducing technologies under the skin, such as lightweight and coated connecting rods, low-friction timing chain and conical valve springs. The company said that special attention has also been paid to heat recovery using an improved Exhaust Gas Recirculation (EGR) system.

"It is boosted by the latest-generation electric motor and battery pairing – which deliver a more compact package that is lighter in weight and lower in cost and reflects significant advances in battery, electric motor and petrol engine technologies.

"The hybrid battery has a higher energy density, which means that even though its size was reduced by 10%, its power output remained the same. It can absorb 28% more energy in the same amount of time, for more rapid self-charging."

The electric motors themselves are smaller but also have an improved power-to-weight ratio. The electric motor provides a supplementary 53kW and 163Nm – to boost overall system output to 90 kW.

The Corolla Hybrid is offered in the valued-minded Xs spec level. This mid-tier grade, Toyota said, combines all the key comfort and convenience features while keeping with the hybrid’s more pragmatic bias.

The Corolla Hybrid offers buyers outstanding fuel efficiency, with an impressively low average fuel consumption figure of 3.5 l/100 km. CO2 emissions are equally low, registering 81 g/km. Combined with a 43-litre fuel tank, the Corolla Hybrid has a theoretical range of over 1200 km on a single tank.

Based on Toyota’s angular 5th-generation sport utility, the RAV4 Hybrid combines a 2.5-litre hybrid powertrain with the TNGA-based 5-seater SUV. The A25A-FXS engine is shared with other global Toyota and Lexus stablemates, such as the Lexus ES and NX300h and the acclaimed Camry Hybrid.

It boasts many of the same technologies shared by the Corolla Hybrid in a larger displacement four-cylinder offering. Featuring an 'undersquare'design with Toyota D-4S port and direct injection, the Atkinson cycle engine generates 131 kW and 221 Nm in ‘ICE’ state.

The electric motor punches out 88kW and 202 Nm to deliver a total system output of 160kW. Power is transmitted to the front wheels via a CVT transmission, seamlessly integrating the two drive sources.

The hybrid pays dividends at the fuel pump, too, as the model’s fuel consumption index is listed at a mere 4.7 l/100 km, with CO2 emissions registering 107 g/km.

One Grade, One Spec

The RAV4 Hybrid is offered in tweaked GX trim. It boasts an LED head and taillamps complete with DRL’s upfront, rain-sensing wipers, heated and power-operated side mirrors and keyless entry.

A six-services or 90,000 km service plan is standard with service Intervals pegged at 15,000 km / 12- months. Toyota’s standard 3-year/100 000 km warranty is included, and customers have the additional peace of mind of an 8-year / 195,000 km Hybrid battery warranty. Service and warranty plan extensions can also be purchased at their nearest Toyota dealer (220 outlets).