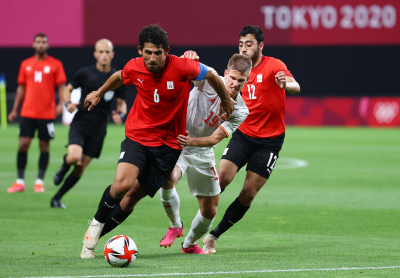 Spain were held to a goalless draw by Egypt in the opening game of the Olympic men's football competition despite the inclusion of Euro 2020 young player of the tournament Pedri.

A frustrating result for Spain was compounded by an ankle injury to Real Madrid's Dani Ceballos as they struggled to break Egypt down.

Ceballos had Spain's best effort, hitting the post in the first half.

Along with Pedri, there were several members of Spain's Euro 2020 squad on display, with Mikel Oyarzabal, Dani Olmo, Pau Torres and Eric Garcia all in the starting line-up.

Spain were knocked out of the Euros by champions Italy on penalties in the semi-final.

France's Olympic tournament got off to a disastrous start as they were thrashed 4-1 by Mexico.

The best chance of a tight first half fell to Diego Lainez but his shot was cleared off the line.

Lainez was the creator of Mexico's second-half opener, crossing for Alexis Vega to head home. Sebastian Cordova then doubled the lead with a neat finish at the near post.

Pierre-Andre Gignac pulled one back for France from the penalty spot, but two late goals for Mexico from Uriel Antuna and Eduardo Aguirre sealed the win.

Elsewhere, New Zealand made history with their first ever win in men's football at the Olympics - a 1-0 victory over South Korea.