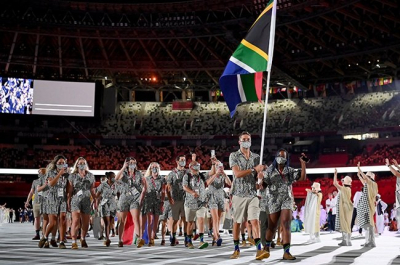 The honour fell to Naomi Osaka to light the flame, the beacon of hope the Olympics attempts to be.

It marked the official opening of Tokyo 2020, a year later than planned, and in the midst of a global pandemic.

Perhaps as expected, Friday's opening ceremony was not of the usual ilk. No carnival like Rio, no skydiving monarchs like London, but a more sombre tone, a sobering reminder that this is a Games taking place in a world still facing its toughest challenge.

"Today is a moment of hope," said Thomas Bach, president of the International Olympic Committee (IOC).

"Yes, it is very different from what all of us had imagined. But let us cherish this moment because finally we are all here together."

This Games is going to be different, dampened by masks, positive tests and the absence of fans. But it is still the Olympics; still the greatest show on Earth, still faster, higher, stronger and now together.

The opening ceremony had faced many a scandal before it even started on Friday, its director fired on the eve of the games for historic jokes about the Holocaust, days after its composer resigned after it emerged he had bullied classmates with disabilities at school.

The ceremony itself was modest, a reminder of all the world has gone through yet offered hope for what is to come.

But the lack of a crowd was stark as socially distanced and masked athletes - though some went without - waved to empty stands, no roar accompanying their march into the stadium.

A 22-strong Team GB delegation was among them, led by flag bearers Moe Sbihi and Hannah Mills of rowing and sailing respectively.

Smatterings of applause sounded from the few inside. Just the media and some 900 dignitaries watched on in the 68,000-seater venue, including US First Lady Dr Jill Biden and French president Emmanuel Macron.

The build-up to these Games has been long, and it's not one that all are welcoming with open arms. Outside the stadium, as the hours ticked down to the start of the ceremony, hundreds of locals had gathered, simmering with excitement and pride and desperate to join in.

But as day turned to night, the mood soured, protesters making their voices heard with chants of "stop the Olympics" heard by the few seated in the stadium.

To inside, where all was subdued yet intimate, a nod to the world's resilience and its togetherness in the fight against a global threat.

The ceremony also paid tribute to the universality of sport, its power to unite those of different cultures and backgrounds and provide a sense of hope, even in the most troubling of times.

"Here is a vision for the future, one that embodies 'unity in diversity', one of peace and respect for one another," said Tokyo 2020 president Seiko Hashimoto.

"This is the power of sport, and an expression of the fundamental values of the Olympic movement. This is its essence."

At the heart of the stadium stood the Olympic cauldron, a representation of the sun atop Mount Fuji. It later opened like a flower, embodying "vitality and hope".

Earlier, the Japanese flag had entered carried by athletes, but also by healthcare workers, after which a moment of silence was held to remember those lost.

The Olympic rings were then formed, crafted of timber from trees grown of seeds brought by athletes in 1964 - the last time the Games came to Tokyo.

After the athlete parade - as lengthy as ever - the performances continued. Some 1,824 drones formed a revolving globe above the stadium, before musicians including John Legend and Keith Urban delivered a moving rendition of John Lennon and Yoko Ono's 'Imagine'.

A somewhat surprising inclusion came after the speeches and the raising of the Olympic flag - Susan Boyle. Yes, you read that right.

The Scottish singer hasn't made the trip to Tokyo, but her rendition of 'Wings To Fly' - a song released in 1971 by a Japanese folk group - accompanied the symbolic release of doves.

Not live doves, fear not, but rather projections and special effects acknowledging the "peaceful intent" of the Games.

A clever display of the sport pictograms followed, but the final act was reserved for four-time Grand Slam champion Osaka, a representation of the new Japan, a person bringing change to her homeland.

The 23-year-old was delivered the torch by 14 others, a group featuring past and present athletes, including a summer and winter Paralympic gold medallist, doctors, nurses and students.

More in this category: « SA Under 23 side off to losing start in Tokyo against hosts. Team SA Tokyo Olympics Day 1 schedule - Here is list of Athletes and their times. »
back to top