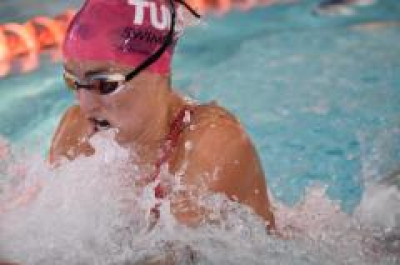 Tatjana Schoenmaker swam so fast Sunday night she nearly swam out of her cap. She did, though, swim into an Olympic record.

The South African attacked the penultimate heat of the women’s 100 breaststroke in preliminaries of the Tokyo Olympics, clocking in at 1:04.82 to take down the Olympic record. It trims .11 seconds off the mark set by Lilly King in Rio. It’s also an African record and a South African record for Schoenmaker, downing the best time of 1:05.74 that she set in April. She owns three continental breaststroke marks.

King was two spots behind Schoenmaker timewise. She won the sixth and final heat in 1:05.55. While she never separated from the back – Sophie Hansson and Martina Carraro were each within three tenths – she looked composed in getting to the wall first.

The surprise of the fourth heat was a disqualification, with Benedetta Pilato of Italy getting sanctioned for foot movements not on the same plane. The Italian holds the world junior record in the 50 breaststroke.

The winner of that slow heat, Russian/King’s longtime rival Yuliya Efimova, is the eighth seed in the semifinals. Hansson will be fourth, she and Carraro the only others in the 1:05s. Russia’s Evgeniia Chikunova is looking like her country’s brightest hope as the sixth seed, while Ida Hulkko of Finland also landed a top-eight spot for Monday morning’s semifinals.

South Africa's other participation in the pool on Sunday was Pieter Coetze, who finished last in 100m backstroke heats in a time of 54:05.

More in this category: « Jon Rahm and Bryson DeChambeau ruled out of Olympics after testing positive for Covid-19. Blitzboks defence stands strong to hold off Kenya and qualify for quarter-finals. »
back to top