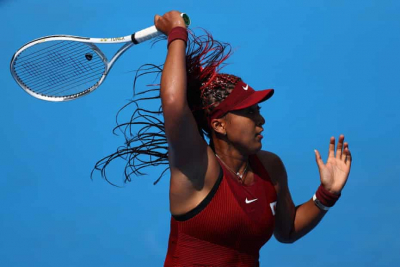 Two of the biggest names of the Tokyo Olympics - Simone Biles and Naomi Osaka - went out of their respective events on day four at the Games.

USA gymnast Biles pulled out of the women's team final on Tuesday.

The 24-year-old left the arena after scoring 13.766 on the vault in the first rotation - her lowest score on that apparatus in her Olympics career.

Biles is the most successful US gymnast of all time and winner of four gold medals and a bronze at Rio 2016.

Meanwhile, tennis star Osaka, one of the faces of the Games for Japan,lost 6-1 6-4 to world number 42 Czech Marketa Vondrousova in the third round.

After her defeat, Osaka admitted the pressure of carrying her nation's hopes weighed heavy on her mind.

"I definitely feel like there was a lot of pressure for this," she said.

"I think it's maybe because I haven't played in the Olympics before and for the first year it was a bit much. I think I'm glad with how I played, with taking that break that I had."

After topping the medal table with eight golds by the end of day three, Tuesday brought gold number nine for Japan when Takanori Nagase beat Saeid Mollaei of Mongolia in the men's -81 kg judo final.

More in this category: « Blitzboks defence stands strong to hold off Kenya and qualify for quarter-finals. Blitzboks finish in 5th spot on the final day of Olympic sevens. »
back to top