Blitzboks finish in 5th spot on the final day of Olympic sevens. 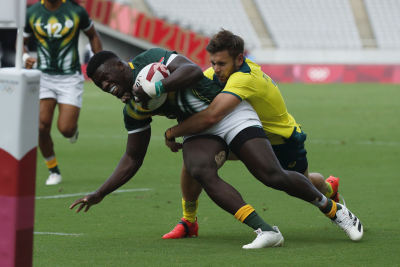 The Blitzboks beat Australia and the USA to finish their campaign strongly and claim fifth place on the final day of the Olympic Sevens on Wednesday.

After the disappointment of being knocked out at the quarter-final stage on Tuesday, the Blitzboks recomposed themselves for a solid finish to their Olympic campaign.

After taking a 17-0 lead in the fifth-place semi-final against Australia, thanks to a brace from Ronald Brown, the South Africans had to hold out for a 22-17 victory.

The Blitzboks welcomed back head coach Neil Powell ahead of their final against the USA. Powell had been in isolation in Kagoshima after testing positive for Covid-19 and had missed the team’s games up to that point.

A galvanised, albeit clearly fatigued, Springbok Sevens team went into the break in the final 14-7 up thanks to tries from Justin Geduld and Sako Makata.

The second half of the final was a bit of a scrap as both teams were evidently exhausted and made a number of handling errors.

However, the Blitzboks’ defensive pressure came to the fore as they pinned the USA in their own half and capitalised.

Kurt-Lee Arendse and Stedman Gans both showed some quick feet to bamboozle the USA and grab a try each, giving South Africa a deserved 28-7 victory.