Tatjana Schoenmaker within a fingertip of world record. 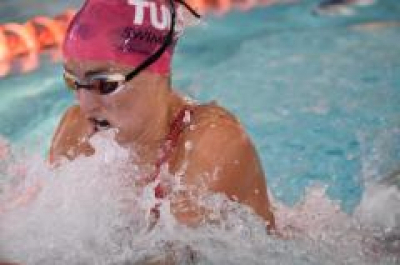 Tatjana Schoenmaker came within just five hundredths of becoming the fastest women in history to swim the 200m breaststroke.

Just like in the 100m event a few days ago, the Pretoria swimmer was once again in spectacular form in the heats, powering her way to a national, continental and Olympic record in 1:19.16.

"Amazing. I must say, I was a little nervous coming in from the 100… I didn’t expect it to be that fast at all,” she said after taking over a second off her previous record.

Asked about getting so close to the world record, the 24-year-old laughed and added: “That time was really fast. When I saw five hundredths I was thinking – if I just had these [long] nails.

"But it was a really good race, I can’t complain. Yes, I was really close. But I’m definitely still going to try my best tomorrow and the day after. Hopefully I can get some recovery in because it is challenging going into the mornings."

Meanwhile, to add to Schoenmaker’s joy was the fact that her Tuks teammate Kaylene Corbett produced a massive personal best to win her own 200m breaststroke heat in 2:22.48 and qualify fourth fastest for Thursday’s semifinals.

"I think Kaylene motivated me. She swam a two-second PB [personal best] so I was like ‘Ah, maybe I can also swim well today.’ She definitely made me feel more relaxed going into the 200. I don’t think I have words to say how happy I am right now."

Corbett had not been able to contain her emotion while watching her teammate finishing in such a sensationally quick time.

"I can’t believe that," she beamed, wiping away the tears.

"We always say we’re sisters in Christ which is a huge thing for us. When she swims well, I’m excited, when I swim well, she’s excited… I can’t explain the feeling. Having her achieve her goals is something that I absolutely love to see and is extremely exciting and inspiring and pushes the whole squad, not just me."

As for her own impressive performance, Corbett added: "I’ve had a hard two years not swimming a personal best which is long for us. So I’ve been quite discouraged every now and then. I’m just so thankful. I just came in here to swim a personal best and that’s just God going over and above what I thought He was going to do."

A little later, Matt Sates celebrated his 18th birthday by securing a place in his first Olympic semifinal in the 200m individual medley.

The Pietermaritzburg swimmer finished fifth in his heat but his time of 1:58.08 was quick enough to qualify 15th fastest.

More in this category: « SA under-23 side crashes out of the Tokyo Olympic Games. Double medal hope for Team SA in 200m breaststroke with Schoenmaker,Corbett victorious in semi's. »
back to top