SA under-23 side crashes out of the Tokyo Olympic Games. 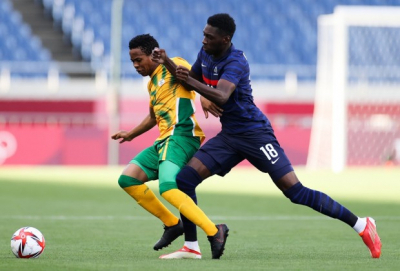 South Africa hopes of reaching the men's football quarterfinals at the Olympics were extinguished by Mexico, on Wednesday, as they fell to a 3-0 defeat in which both sides had a player sent off.

Goals from Alexis Vega, Luis Romo and Henry Martin were enough to take El Tri through to the knockout stages alongside Group A winners Japan, while David Notoane's side are eliminated alongside France after failing to take a single point from their three group matches.

It was the Central Americans who took the lead in the 17th minute through Vega, who tapped home his second of the tournament from close range after being picked out by Uriel Antuna.

With South Africa limited to testing the Mexico goal from range,Ronwen Williams found himself increasingly under pressure as the 2012 gold medalists sought a second and he pulled off a fine save to deny the outstanding Antuna only minutes after Amaglug-glug had fallen behind.

The lively Vega had already hit the crossbar following another delightful Antuna delivery from the right flank before Romo added a second moments before half time, finishing comfortably from six yards after SA failed to clear their lines from a corner.

With Japan leading France, it left South Africa requiring five goals without reply heading into the second half, and it was little surprise that they appeared shorn of their traditional mzansi flair after the break as the reality of impending elimination dawned.

The contest was ended definitively within five second-half minutes, as captain Tercious Malepe's hefty challenge into the back of Martin was upgraded to a red card following a VAR check, and the overage striker dusted himself off to finish coolly past Williams moments later after being played in one-on-one with the besieged goalkeeper.

Carlos Rodriguez was sent off eight minutes later after deliberately bringing down the pacyLuther Singh to deny a goalscoring opportunity, but the fight had ebbed away from South Africa, whose wait for a first Olympic victory since 2000 continues.

Japan, 4-0 victors over France, now meet New Zealand in the quarterfinals, while Mexico advance to play South Korea on Saturday.