SA swimmers,Schoenmaker,Corbett on the brink of Olympic history. 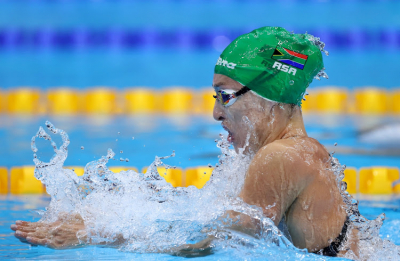 All eyes will be on the Tokyo Aquatics Centre tomorrow morning as Tatjana Schoenmaker chases her second Olympic medal.

Having dominated in the heats of the 200m breaststroke, where she was just five hundredths of a second off the world record, and then the semi-finals, the 24-year-old is on target to claim Team SA’s first gold of the Games after already clinching a silver in the 100m event.

Her time of 2:19.33 to win her 200m semi-final was 1.24 seconds quicker than her nearest rival. Joining her in the 200m breaststroke final will be Tuks teammate Kaylene Corbett who has also shown impressive form in Tokyo. She took almost two seconds off her personal best in the heats and went even quicker with a 2:22.08 to win her semi-final.

Should both of them manage to clinch medals, it will be the first time in history that two South Africans will share an Olympic podium in any sport.

"I’m excited to rest for the rest of the day to focus on tomorrow. Hopefully everything will just work as planned and then I can give it my all again," Schoenmaker said after her semifinal.

"We’ve seen from the 100 that anything can happen… I don’t think we must get too excited – especially when you see you’re leading, because people catch up in the second half. It’s such a strategic race. For myself, I just want to focus on my own lane tomorrow. I learnt that from the 100 so if I can just do that, then I’ve swum the perfect race."

This is the second straight major championships that there will be two South Africans in the 200m breaststroke final, with both Schoenmaker and Corbett having reached the medal race in Gwangju in 2019 as well, where the former secured a silver medal.

Corbett reckoned: "I’m extremely excited… I was hoping for this. Obviously your times in training start showing good things as you progress so I was hoping for the best, but God is just going over and above what I expected from this meet."

In the 100m butterfly, four-time Olympic medallist Chad le Clos missed out on a place in the semi-finals after finishing sixth in his heat in 51.89. Teammate Matt Sates, swimming at his first Games, finished fifth in his heat in 52.34.

Earlier in the day, Sates had contested his first Olympic semi-final in the 200m individual medley where he finished 14th overall in 1:58.75.

Meanwhile, Le Clos considered himself an underdog coming into these Games but still managed to reach a third consecutive Olympic 200m butterfly final. The 2012 champion was disappointed with his fifth place in 1:54.93 though.

“It stings really bad but that’s part of life,” he said after the final, which was won by Hungary’s world record holder Kristof Milak.

“It hurts a lot but it’s my third Olympic 200 fly final which isn’t too bad. I’ll be back. It’s no problem,” he added, suggesting gold at next year’s Commonwealth Games is his next major target.

Elsewhere, there was a record-breaking performance by the SA women’s 4x200m freestyle relay team of Erin Gallagher, Aimee Canny, Rebecca Meder and Duné Coetzee. The quartet finished sixth in their heat in a new SA and African record time of 8:01.56 but did not make it through to the final.

Gallagher had earlier made up for a disappointing 100m butterfly performance (59.69 – two seconds off her best) by swimming a 54.75 in the 100m freestyle. It wasn’t enough to see her into the semi-finals but she was pleased with the effort afterwards.

"Being at the Olympics and embracing the opportunities and the experience has been a big goal of mine regardless of the swimming times," said Gallagher afterwards.

"It’s all about the experience and hopefully by Paris 2024 I won’t be as nervous to race and I’ll know what it’s like to swim at an Olympics. Whatever I do here I’m going to learn from so I’m very grateful for the opportunity."

Experience was also the key word for fellow 17-year-olds Pieter Coetze who finished eighth in his  heat of the 100m backstroke in 54.05 and Ethan du Preez who was also eighth in his 200m butterfly heat in 1:58.50.

"It wasn’t a PB but hopefully next time I’ll do much better," said Du Preez.

Coetzé added: "It’s been amazing. I’ve really been enjoying it. I would have liked to go a bit faster. My PB would have gone through to the semifinals quite comfortably but if it’s not today, I believe my time will definitely come to perform at this level. I’m just going to use this as a learning experience going forward."

The same went for Meder, who admitted her Olympic debut had been a bit of a blur after finishing seventh in her 200m individual medley heat in 2:14.79.

The other young South Africans who have been in action in the Tokyo pool were US-based Michael Houlie who finished eighth in his 100m breaststroke heat in 1:01.22 and Martin Binedell who was second in his 200m backstroke heat in 1:58.47 but didn’t progress further.

More in this category: « Double medal hope for Team SA in 200m breaststroke with Schoenmaker,Corbett victorious in semi's. Zazini,Scott-Efurd to open SA Athletics team's Tokyo Olympic campaign. »
back to top