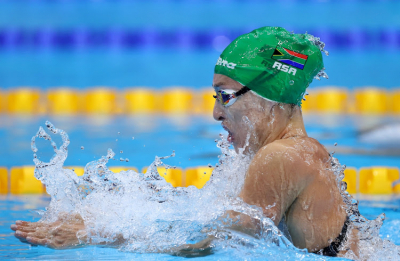 Swimming in lane 4, Schoenmaker timed her race to perfection, sitting behind American Lilly King for the first 100m before making her move over the last 100m.

"If I could just make the final, that was what I said since I started coming, to make the final is already an amazing achievement,” she said, adding it was a bonus to have Corbett in the line-up with her.

"I was lucky to have my teammate there. We were all two too — two Americans, two British, two South Africans [in the final]  — so it was just amazing to have that teammate there."

The previous world record, set by Denmark's Rikke Moller Pedersen at the World Championships in 2013, was 2:19.11.

Schoenmaker and Corbett are only the third pair of SA swimmers to have made the same Olympic final after Roland Schoeman and Ryk Neethling in the 100m freestyle at Athens 2004 and Penny Heyns and Sarah Poewe at Sydney 2000.

Schoenmaker also praised compatriot Heyns, who won the breaststroke double at Atlanta 1996, for encouraging her along the way. "I haven’t achieved so much yet," she added.

Schoenmaker is only the 10th South African to have won multiple medals at a single Games, and the fourth since readmission, after Heyns, Schoeman (Athens 2004) and Chad le Clos (London 2012 and Rio 2016).

More in this category: « Alexander Zverev beats Novak Djokovic to reach Olympics final. Schauffele beats weather suspension to take Olympic lead with record-tying round of 63 . »
back to top