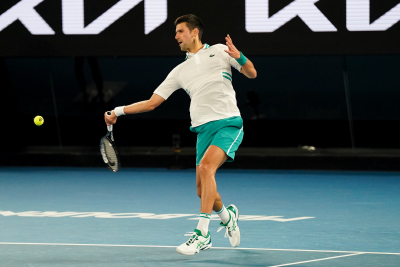 Novak Djokovic's hopes of winning a 'Golden Slam' are over after he lost to Alexander Zverev in the Olympic tennis semi-finals.

Serb Djokovic, the world number one, was bidding to become the first man to win all four Grand Slam titles and an Olympic gold medal in the same year.

"I feel terrible," said Djokovic, who refused to blame the incredibly humid conditions.

"It's just sport. He played better. You've got to give him credit for turning the match around. He served extremely well. I was not getting too many looks at the second serve.

"My serve just drastically dropped. I didn't get any free points from 3-2 up in the second. My game fell apart."

Djokovic, 34, was later knocked out of the mixed doubles semi-finals alongside compatriot Nina Stojanovic, following a 7-6 7-5 defeat to Russian pair Aslan Karatsev and Elena Vesnina.

It will be an all-Russian final as Anastasia Pavlyuchenkova and Andrey Rublev defeated Australians Ashleigh Barty and John Peers in their semi-final.

Djokovic, who will play for a bronze medal in both events, faces Carreno Busta in the singles on Saturday. His previous best at the Olympics is bronze at Beijing 2008.

More in this category: « Weather forces suspension of second round in Olympic golf. SA's Tatjana Schoenmaker wins breaststroke gold in world record time. »
back to top