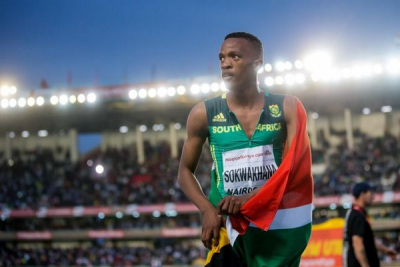 Former world junior champion Sokwakhana Zazini got South Africa's track and field campaign off to a promising start on Friday, progressing to the men's 400m hurdles semifinals at the Tokyo Olympic Games.

Zazini finished third in his heat in a season's best of 49.51, with Rai Benjamin of the United States winning the race in 48.60.

Among the automatic qualifiers for the next round, Zazini will be in action again on Sunday afternoon.

Distance runner Dominique Scott-Efurd, the only other SA athlete in action on the opening day of the track and field competition at the Games, also set herself a season's best of 15:13.94 in the women's 5 000m heats.

She was 13th in her race, however and missed out on a place in the final.

On Saturday 6 members of the SA team will be in competition as the athletics competition picks up pace at the Tokyo Games.

"It was a good day at the office in the men's 400m hurdles for us on  Day 1. We trust it will buildup confidence in the camp and inspire those who are yet to begin their competition.

"All athletes must just take it a step-at-a-time which is one heat at a time to keep focussed. The ultimate goal is to reach the finals.

"In the short sprint tomorrow, we expect to watch some interesting races because this is where athletes around the world have raised the bar together with our athletes," said James Moloi the President of Athletics South Africa.

Schedule of SA athletes on Saturday:

More in this category: « Zazini,Scott-Efurd to open SA Athletics team's Tokyo Olympic campaign. Weather forces suspension of second round in Olympic golf. »
back to top