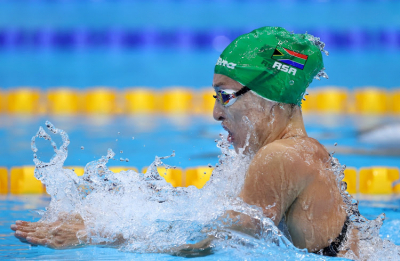 South African swimming action at the Tokyo Aquatics Centre came to an end on Saturday morning with one last national record-breaking performance from Emma Chelius.

The Durban swimmer took a further one hundredth of a second off the SA record she set in the heats on Friday, finishing sixth in her semi-final in 24.64. That was just two hundredths off the African record set by Egyptian Farida Osman at the 2017 World Championships in Hungary.

"I’m a little bit disappointed that I didn’t manage to crack that record, but I’ll still be hunting it down some other time," Chelius said afterwards.

"I knew with the 50, there’s always that slight chance on the day and to have done a personal best, I couldn’t have asked for more so I’m really happy with that."

Summing up her time in Tokyo, Chelius added: "I think this has been the most amazing experience from my first Olympics and I’ll definitely learn from what I’ve gained here.

"It’s been beyond my best dreams that I could have imagined for this Olympics – I think especially having such a great group of girls all together. I’ve felt amazingly supported this entire journey and we’ve also felt so much love from back home so it’s been really special.

"I’m so proud of my entire team and I really have to give props to our coaching staff. They’ve also done an incredible job, just keeping the morale up, keeping us all focused – it’s been quite a long week so I’m proud that I was able to maintain my focus right until he last day, even though everyone else is finished," added Chelius.

Looking back on an exceptional week in Tokyo, which has included a gold and silver from Tatjana Schoenmaker, and the sensational world record in the 200m breaststroke, two fifth places, for Chad le Clos and Kaylene Corbett, and five swimmers on the team reaching semi-finals, coach Wayne Riddin said: "What can I say except that it was an absolute honour and a privilege to be here to witness another world record from a South African swimmer.

"I was fortunate to be present in London in 2012 when Cameron Van den Berg broke the world record and Chad le Clos beat the famous Michael Phelps. Being on the coaching staff here with Rocco Meiring has been amazing, just to witness how he put together the final moments of something special. He kept his cards close to his chest by not revealing too much as to how fast Tatjana could swim.

"I think the Olympic record in the 100m breaststroke was a surprise to him and Tatjana but thoroughly deserved. This certainly lifted our spirits significantly and pulled the team together as we looked forward to the 200m event.

"It is always special when one can feature two South Africans in a final. I think everyone in South Africa was behind our two girls and the emotions were extremely high when Tatjana won the gold and got the bonus of the world record at the same time.

"While we celebrate her victory, one must also give full credit to Kaylene for her effort to finish fifth and in a personal best in a very difficult final for her. While the ladies outshone the men this time, it was great to see the team spirit and the fact that there were three young boys of just 17 years of age who gained huge experience for the next three years leading up to 2024. Learning from the likes of Chad and Brad Tandy was amazing for these youngsters. To see Emma Chelius finish off our Olympics in the pool with two South African records in a row in the 50 meter freestyle just put the cherry on the top," added Riddin.

Attention now switches to the Open Water 10km marathon swim, where Michelle Weber will be competing on 4 August and Michael McGlynn in the men’s race on 5 August.

Speaking about those events, Riddin reckoned: "It’s going to be tough out there for the 10km swimmers having had to endure the recent qualification in Portugal, but I am sure they will do their best."

More in this category: « Closing birdie maintain's Schauffele's 1-stroke lead heading into final round. Christiaan Bezuidenhout loving being an Olympian. »
back to top