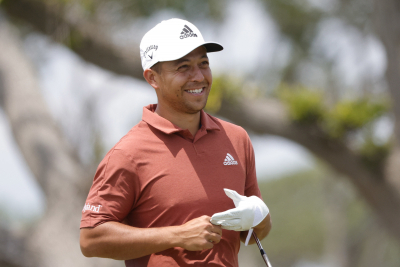 Kawagoe, Japan – American Xander Schauffele enters Sunday's final round of the men's Olympic golf tournament maintaining the one-stroke lead he held at the beginning of the day, though now the closest pursuer is Japan's own golf hero, Hideki Matsuyama, who replaced Mexico's Carlos Ortiz as Schauffele's closest pursuer at Kasumigaseki Country Club.

Schauffele did so with a round of 3-under par 68, which on the surface might appear to be a standard, solid round of golf. But looks can be deceiving, which became clear to those watching his opening tee shot, which immediately had him pointing far left. He didn't hit his first fairway until the 8th hole. But he still had enough in his arsenal to get through, including a brilliant 9-iron (from the fairway) on No. 18 that led to an easy birdie-3 and a return to his solo lead.

"Golf is funny, you kind of have to fall back on parts of your game when other parts aren't working," he said. "I think I feel like yesterday I wouldn't say I was firing on all cylinders but things were clicking kind of coming home and, man, was it a different day today. So, I'm going to try and get some better feels on the range going into tomorrow."

Throughout the day, Schauffele withstood the challenges thrown his way, ultimately staving off an impressive list of contenders before that final exclamation point on the 18th hole, that gave him a 14-under 199 total. That included his two playing competitors, Matsuyama and Ortiz.

Matsuyama, who undoubtedly would have drawn massive crowds in this golf-crazed country had fans been allowed on site, overcame an opening bogey to shoot 67 and is alone at 13-under, while Ortiz shot 69 that included a closing bogey and enters Sunday tied with Paul Casey of Great Britain (66), two strokes behind. Four others are another stroke back, including Rory McIlroy of Ireland (67), Sebastián Muñoz of Colombia (66), Mito Pereira of Chile (68) and first-round leader Sepp Straka of Austria (68).

"I could have had a bad attitude or whatnot, but hung tough, fell back on certain parts of my game to hold me tight," Schauffele said. In part, because of his putting. "Your putter doesn't know how bad you're swinging it, it's a completely different part of the game. So I made that joke to my caddie on 9 saying, if I can roll this in, it's ugly, but we're getting it done right now. So I would like tomorrow to be a little bit more fun all around."

Matsuyama is carrying the weight of his nation into the final round, a feat of strength he couldn't have imagined after contracting COVID-19, the same culprit that is robbing him of those onsite fans. "I definitely could not have believed it," he said. "To be honest, the endurance part of my game has been struggling a little bit, but it's held up, thankfully it's held up the last few days, so it's going to hopefully it's going to hold up tomorrow as well."

He has played in final pairings before, but this will be a totally new experience for him.

"This is my first time playing the Olympics, so I'm not sure what to experience," Matsuyama said. "But I'm sure it's going to be a new great experience, so and also not sure what kind of preparation I'll be able to put in before tomorrow's round, but I'm going to do my best."

The round, which started under a bright, penetrating sun and – finally – no forecast of afternoon storms, turned into a free-for-all with early starters taking advantage of the ideal scoring conditions to bunch up the leaderboard. By the time the final grouping of Schauffele, Matsuyama and Ortiz had played seven holes, there momentarily was a five-way tie for the lead at 11-under (with Casey and Ireland's Shane Lowry joining the fray), with five others within two strokes.

Schauffele added another birdie-3 on No. 15 to move two ahead Ortiz, Matsuyama and now Casey, who finished off his strong round of 66 with birdies on the last two holes. But another two-stroke swing occurred on the par-3 16th as Schauffele made bogey and Ortiz birdie, putting them in a tie at 13-under par, one stroke ahead of Matsuyama and Casey.

The day was settled after Matsuyama birdied No. 17 and 18 produced Schauffele's go-ahead birdie and Ortiz's bogey.

"It's tricky out here," Ortiz said. "You get out of the position and you have to find a way to get it back in position. I felt I didn't maybe make as many putts as I wanted, I still rolled the ball fine, but I'm happy, I am in a great position for tomorrow and that's what matters."

As are a number of players, including the final grouping of Schauffele, Matsuyama and Casey.

"I played with Xander in the third and fourth day together at the Masters," Matsuyama said. "I'm sure Xander will come out determined to win the gold medal tomorrow, so hopefully on my end too I'm going to come out strong on the mental side."