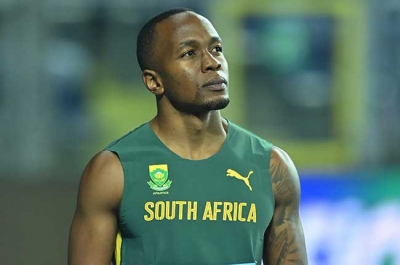 South Africa's fastest men opened their Olympic campaign in explosive fashion on Saturday, making their collective presence felt in the 100m heats at the Tokyo Games.

Gift Leotlela (10.04) and Akani Simbine (10.08) won their first-round heats, while Shaun Maswanganyi finished third in his heat in 10.12. All three athletes booked their places in the semi-finals to be held on Sunday morning.

"I'm excited to be through and I'm keen to run again tomorrow," said Simbine, the national record holder. "This track feels really quick and I'm looking forward to running quicker on it."

Wenda Nel also got off to a good start in the opening round of the women's 400m hurdles. She finished third in her heat in 56.06, progressing safely to the semi-finals of her event, to be held on Monday.

"It wasn't a smooth race but I did enjoy it," Nel said. "I think I was a bit lucky to get the slower heat, to get the automatic qualifier for the semis, but I have more to show and more to give so I'm looking forward to the semi-finals."

There was disappointment in the men's long jump, however, with African champion Ruswahl Samaai landing at 7.74m.

He was ranked 22nd in the qualifying round and was eliminated ahead of the final, along with countryman Cheswill Johnson, who was unable to register an official mark.

“We are satisfied with how this day went and are looking forward to the semi-finals for all the athletes because these Games have quality fields and we are counted alongside with them,” said James Moloi, the President of Athletics South Africa.

Schedule of SA athletes on Sunday: