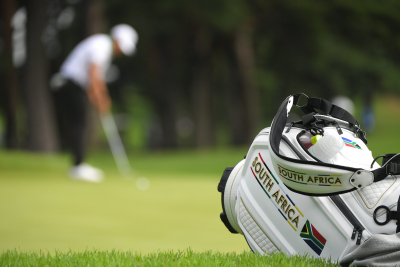 American Xander Schauffele clinched the men's golf gold medal on a nail-biting final day that has gone to a seven-way play-off for the bronze medal.

Ireland's Rory McIlroy and Great Britain's Paul Casey are in the sudden-death knockout for third, along with Japan's Masters champion Hideki Matsuyama and Open champion Collin Morikawa of the United States.

Schauffele's overnight lead was wiped out on Sunday before he birdied the 17th to win by one stroke on 18 under par at Kasumigaseki Country Club.

Former South African and now Slovakia's Rory Sabbatini closed with an Olympic record 10-under round of 61 to finish in silver at 17 under.

Schauffele led by one shot heading into the final day and stretched that advantage to three strokes with a birdie-birdie start, adding two more before the turn.

But a flying finish from Sabbatini and a bogey for the American at 14 saw his lead wiped out as he approached the final stretch.

Schauffele took a penalty drop on that hole after leaking a drive into the bushes and then caught a branch on his downswing, escaping with just the one dropped shot as he went on to complete a final round of 67.

The 27-year-old spoke before the Games about how his father and swing coach, Stefan, was a former German decathlete whose own ambitions of competing at an Olympics were ended when he was left blind in one eye after a car accident.

Schauffele responded to slipping into a tie for the lead by making a birdie on the 17th to move clear once more and looked set to realise his father's Olympic dreams.

There was a nervy, errant drive on the final hole but the world number five held his nerve to sink a gold medal-clinching par putt.

"I really wanted to win for my dad. I am sure he is crying somewhere right now. I kind of wanted this one more than any other," said Schauffele, whose grandparents live in Tokyo.

"You are trying to represent your country to the best of your ability and then you add family stuff on top of that. I'm probably going to have a nice call with my grandparents tonight.

"Everyone is back home watching. I was feeling the love from San Diego and Las Vegas this whole time. I'm a little speechless right now, quite honestly."

Bezuidenhout closed with a 67 for a 72-hole total of 11-under-par 273, finishing seven strokes off the winning total of 18 under par by American Schauffele.

Higgo signed off his Olympic journey with a final round of 72 for a level-par 284 finish.

It was an incredible final round, including a pressure-filled battle for the gold medal and then a seven-man playoff for bronze.