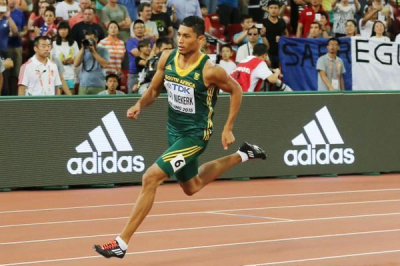 Opening his campaign in defence of his title, world record holder Wayde van Niekerk kept his hopes alive by progressing safely through the opening round of the 400m event at the Tokyo Olympic Games on Sunday.

Van Niekerk finished third in his heat, clocking 45.25 seconds and qualifying automatically for the semifinals on Monday.

Zakithi Nene, who crossed the line in 45.74 and Thapelo Phora, who set a season's best for himself of 45.83, both finished fifth in their respective 400m heats and did not progress to the semifinals.

Sokwakhana Zazini also set his season's best of 48.99 in the men's 400m hurdles semifinals, but he was sixth in his race and did not make the final.

In the men's 100m final, African record holder Akani Simbine grabbed fourth place in 9.93, storming over the line just 0.04 outside a place on the podium.

"I'm happy for Jacobs and I'm disappointed in myself, but I'm glad I could make the final," Simbine said. "It sucks, but it is what it is.

Earlier, Simbine had finished fourth in his semifinal in 9.90, progressing to the final, while countrymen Gift Leotlela (10.03) and Shaun Maswanganyi (10.10) were knocked out in the penultimate round.

James Moloi, the President of Athletics South Africa, said: "All eyes are obviously on Wayde because he set was a super world record of the time in the last edition of the Games. So, the world wants to see whether he is up to the task to deliver a podium performance and the rest.

"Based on his work preparing for the Olympics, we have reason to remain optimistic. In the final anything is possible. So, it’s not over until it’s over. Wenda as well, seems to be in a good space and we wish both of them well."