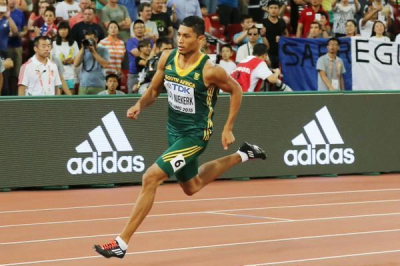 Olympic champion and world record holder Wayde van Niekerk has been eliminated from the men's 400m at the Tokyo Games.

Van Niekerk, who was aiming to defend the title he won at the 2016 Rio Olympics, finished fifth in his 400m semifinal in 45.14.

Only the top two from each semi-final qualify automatically for the final, and Van Niekerk's time was also not fast enough to secure one of the other two slots.

He finished 12th fastest after the semis.

While Van Niekerk's pedigree has never been in doubt, a place in the final was not always guaranteed in the build-up to Tokyo given his ongoing struggles with injury.

In 2017, the 29-year-old suffered a devastating knee injury during an exhibition touch rugby match that some experts believed would threaten his career.

It has been a long road back to full health since, and given that absence of international competition along the way, there has been uncertainty surrounding how Van Niekerk would perform in Tokyo.

"I expected way more from myself and it obviously didn't work out the way I wanted it to, but it is what it is. We move forward," Van Niekerk said.

In the women's 400m hurdles, Wenda Nel was seventh in her semifinal in 56.35 and she was also unable to progress to the final.

"Our attention now turns to the remaining athletes to continue their efforts for a podium finish. We are looking forward to their participation as we continue to search for a medal from athletics," said James Moloi, the President of Athletics South Africa.

Seven South Africans will turn out in the track and field competition at the Games on Tuesday.