Blignaut progress into shot put final but sprinters miss out. 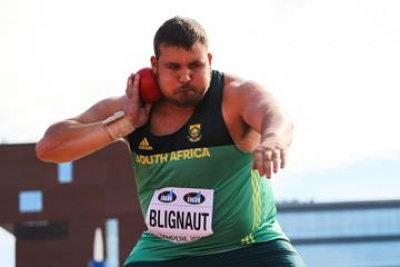 Shot-putter Kyle Blignaut was the only South African to progress from Tuesday night’s athletics action as the three 200m sprinters all fell at the semifinal stage.

The 2018 world junior champion’s second-round effort of 20.97m saw him finishing eighth overall in qualifying and safely through to Thursday’s 12-man final.

"I’m happy with the performance… I’m really excited about that," said Blignaut afterwards.

"Me and my coach, our plan was always to go deep 20s, low 21s in the qualification and getting through to the final and from there we can aim to get a new personal best, middle 21s. On any day that can get you into the top six and you never know, maybe a medal. I know in 2016, a 21.30 medalled so if I can get anywhere above 21.30, I’d be happy with that."

Earlier in the evening, teammate Jason van Rooyen could not make it through his shot put qualifying group, his best effort of 20.29m leading to a 19th place finish overall.

Over on the track, 2012 Olympic finalist Anaso Jobodwana finished last in his 200m semifinal in 20.88 while Clarence Munyai was sixth in his, in 20.49, the same time he ran in the heats.

Neither was particularly disappointed with the result considering their troubled build-up to the Games.

"I have a very low battery and that’s one of the things I didn’t really have time to fix this season so it’s the little things," explained Jobodwana afterwards. "So I can run easy 20.7 in the heats and then I’m too tired to come back and run faster or the same time. It’s one of those things that only time can fix, in terms of getting back into the training room, getting back into the weights room and chipping away at that."

Munyai explained: "It’s my fourth race of the season after injury so coming to Olympics and making a semifinal, I’m quite happy, I’ll take that. A month ago I tore my quad so for me to come back and do that – many people wouldn’t do that – so I’m quite happy, not disappointed at all."

Fellow sprinter Shaun Maswanganyi was the quickest of the trio on the night, finishing fourth in his 200m semifinal in 20.18, but also not making it through.

The other South Africans in action were Precious Mashele, who missed out on the 5000m final after finishing 15th in 13:48.25, and Antonio Alkana who came desperately close to reaching the 110m hurdles semifinals. He finished sixth in his heat in a season’s best 13.55, but missed out on making it through as one of the fastest non-automatics qualifiers by mere thousandths of a second.

Meanwhile Elaine Thompson-Herah confirmed her place among the pantheon of sprint greats as she secured an unprecedented women's 100m-200m double-double with a sensational victory over the longer distance in Tokyo.

The 29-year-old Jamaican surged home in 21.53 seconds, just 0.19 seconds off Florence Griffith-Joyner's long-standing world record, to back up her individual golds from Rio 2016.

It is the second-fastest time in history.

Trailing in her draught, Namibian teenager Christine Mboma, who was barred from her favoured 400m two weeks before the Games on account of her naturally high testosterone levels, took silver in 21.81.

More in this category: « Wayde van Niekerk advances into 400m semis in Tokyo. Olympic artistic swimming duet set new benchmark for the sport in SA. »
back to top