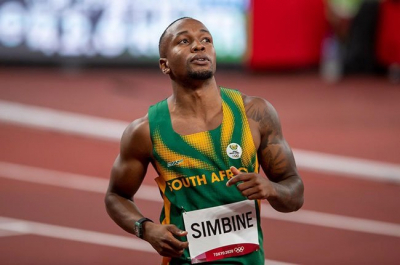 All eyes will turn to an exciting day of competition on Thursday after a tame day for the South African track and field team at the Tokyo Olympic Games on Wednesday.

Javelin thrower Rocco van Rooyen, the only SA athlete in action on Wednesday, ended 23rd in the qualifying round with a best attempt of 77.41m He did not progress to the final.

Thursday's programme features Kyle Blignaut in the men's shot put final and Wayne Snyman in the 20km walk, while the national relay team will open their campaign in the 4x100m heats.

"If I get anything above 21.30m, I'll be happy with that," said Blignaut, who believes he has an outside shot at a medal if the conditions are good in the final. On a great day, I can go 22 metres."

James Moloi, the President of Athletics South Africa said: "Tomorrow is another day of competition for our remaining athletes. We wish them well. "

Schedule of SA athletes on Thursday:

The 26-year-old, who took bronze in the 100m final on Sunday, won in 19.62 seconds, making him the eighth-fastest man in history.

Lyles led into the final quarter but slowed as De Grasse and second-placed Kenny Bednarek ran him down.

The American teenager broke Rio 2016 champion Usain Bolt's world junior record for the event in May and may well be its future, but it was De Grasse, himself once the next big thing, who finally lived up to his billing as Bolt's heir apparent.