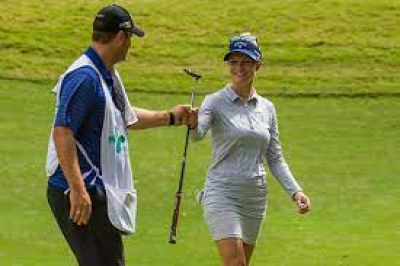 Kawagoe, Japan – While the summer heat was something of a forgotten concern ahead of the Tokyo Olympics due to the pandemic, it definitely was noticeable last week during the men's golf competition and became a real-life factor Wednesday as the women's tournament got underway at Kasumigaseki Country Club.

Leader Madelene Sagstrom certainly didn't experience the 41C/105.8F afternoon heat index in her home country of Sweden, but she did attend Louisiana State University, now lives in Orlando, Florida, and has played in even worse furnace-like conditions in Thailand and Singapore.

"I'm not going to lie, it's very hot," Sagstrom said after shooting 5-under-par 66 to take a one-stroke lead over world No. 1 Nelly Korda of the USA and Aditi Ashok of India. "But it's manageable. I know I mean most of us have been in Asia, played a lot of golf over here so we know kind of what to do, you drink a lot of water you have cooling towels, umbrellas, kind of just maintaining the energy and not go crazy. I think at this point it's harder for the caddies than it is for the players, so it's more about making sure they're staying upright."

Which, in fact, has been a problem.

On Tuesday, U.S. Women's Open champion Yuka Saso had to replace her caddie due to the heat. And today, American Lexi Thompson lost her regular caddie, Jack Fughum, on the 15th hole and had team manager Donna Wilkins step in to finish the round. "I was so worried about him and, I mean, it's so hot out there," Thompson said after a difficult round of 73. "I'm from Florida and I'm still not used to that bad of heat. I just hope that he's okay and he gets the hydration he needs, the nutrients tonight to go into the next few days. If not, I'll figure something else out. I just want him to be healthy."

Korda is another Floridian who is used to hot playing conditions, but after her round, she admitted to being light-headed a couple of times when teeing up her ball. "I think the mental aspect of it is probably the hardest just because you have to keep yourself hydrated and you kind of lose it a little out there," she said. "But I kept myself in it, made sure I drank a lot of electrolytes, too."

So Wednesday, in part, became a matter of survival, with Sagstrom coming away as the leader after a clean six-birdie, bogey-free round.

"I would say mostly my short game was kind of my savior," she said. "I was striking the ball all right but not great, so having a strong short game and just giving myself the chances, like solid par chances was kind of the key of my round today."

Sagstrom then echoed a consistent Olympic golf theme by praising the East Course and its condition. "This course is beautiful," she said. "The condition of it has been perfect from the start. I like long golf courses in general and it fits my game really well, so very excited with the layout, it suits my eye and the greens are rolling phenomenal which works with my putting too. So, it's phenomenal."

Korda, meanwhile, after parring the first hole, went bogey-birdie-bogey before birdieing three of the next four holes, then played consistently on the back with two more birdies. "I'm hoping I'm in total control," she said. "I kind of sprayed some shots out to the right on my last two holes with my irons, but you're going to have that, you're going to lose a little bit of concentration, but I'm going to go to the range after, after I cool off inside for a bit and then try and work on it."

After Korda finished, Ashok came in with a chance to finish at 5-under by herself but bogeyed the final hole.

"I think I played better than I expected today because I had a lot of hybrids into the greens, so I didn't really expect to be like 5-under through 17," said Ashok, a returning Olympian who was the youngest golfer five years ago in Rio at age 18. "But, yeah, I kind of holed some putts and holed important par putts as well which kept the momentum. So, yeah, it was a good day."

Another stroke back at 3-under 68 are Matilda Castren of Finland, Jin Young Ko of Korea and Carlota Ciganda of Spain. They are followed by nine players at 69, including returning gold medalist Inbee Park and teammate Sei Young Kim of Korea.

There's also Wei-Ling Hsu of Chinese Taipei, who settled at 69 after taking the early lead with birdies on five of the first six holes ... perhaps inspired by the outstanding performance of compatriot C.T. Pan on Sunday. She helped celebrate after Pan recovered from an opening 74, shot a closing 63 to make a seven-way playoff for the bronze, then emerged as the last man standing against the likes of Japan's national golf hero Hideki Matsuyama, Ireland's Rory McIlroy and American Collin Morikawa, who was the last to fall. As the world's 208th-ranked player at the time, Pan outlasted these three players who have combined for seven major championship titles, including two this year. Once Pan beat Morikawa with a par at the 18th hole, Hsu was among several who rushed the green and doused Pan with water.

"That was amazing, what C.T. did," Hsu said. "I was practicing here on Thursday and I think he shot like 3-over (on Thursday) and he is just amazing. He kept making birdies and in the playoff with seven people, he played another four holes. I was able to be in there to watch him and recognize that someone from Chinese Taipei was able make a bronze medal in front of me. I was able to watch the ceremony and I was tearing in my eyes. I was so touched. It was just incredible. It's so touching every time someone wins a medal which is an inspiration to me."

Now the field returns to Kasumigaseki Thursday for another day of sweltering heat, another day of hydration, electrolytes and survival, and a clear vision of what's at stake.

More in this category: « Olympic artistic swimming duet set new benchmark for the sport in SA. South African athletes gear up for Thursday's olympic finals. »
back to top