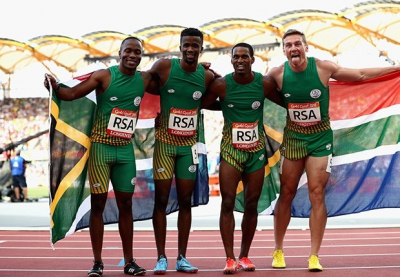 South Africa's 4x100m relay team had an unfortunate mishap in their heat as they did not finish their race at the Tokyo Olympics on Thursday.

The South African team, which consisted of Clarence Munyai, Shaun Maswanganyi, Chederick van Wyk and Akani Simbine, were the major medal prospects after winning gold at the World Athletics Relay Championships in Poland.

The SA team was plagued with injury before the relay as Gift Leotlela pulled out with a niggle after his performance in the 100m semi-final.

Maswanganyi came in after his stellar performance in the 100m and 200m, where he made both semi-finals.

Running in lane 7 in the blazing heat on Thursday, Munyai started it off for South Africa, but the promising team could only get to the 100m mark before a baton mishap.

Munyai meant to pass the baton to Maswanganyi at the first changeover, however, the runners nearly collided with each other as SA failed to finish.

"I came out the same way and when it was time for me to take my hand out, he was already on me so the problem was the exchange between me pushing out and me getting the stick.

"There should've been more practice and there was a lot of confusion, but we tried what we could, it was just unfortunate."

Van Wyk, who arrived in Tokyo to only compete in the 4x100m relay, was disappointed not to get a race in his debut Olympics.

"It's tough, I was ready for this one and I was well prepared," said Van Wyk.

"I couldn't see what happened, it was quite far and I saw he lost the baton."

Van Wyk insisted that there was no blame but says he is more hungry than ever for Paris 2024.