No one was hotter than Nelly Korda on, quite literally, a blistering day. 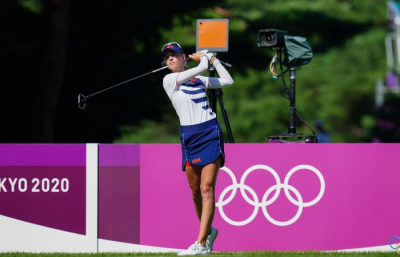 Tokyo 2020 – Nelly Korda, daughter of former tennis player Petr, in the lead after the second round.

Kawagoe, Japan – Following a day of more scorching temperatures, torrid rounds and a potential game-changing storm on the horizon, the fate of the women's Olympic golf tournament is as unpredictable as the men's seven-way bronze medal playoff was on Sunday.

What we do know is that world No. 1 Nelly Korda of the USA totally destroyed the immaculate, susceptible Kasumigaseki Country Club East Course through 17 holes on Thursday and was staring at the magical women's 59 that only IGF President Annika Sorenstam has recorded in prominent professional competition, that back in 2001. Although Korda ultimately double-bogeyed the final hole, she still finished the day with a record-tying 62, 9-under par, to open a 4-stroke lead at the midway point of the chase for gold. Or so we hope.

The potential wrench is another Pacific storm that could bring torrential rain and wind to the area by Saturday's scheduled final round, thus ravaging the tournament's schedule ... even to the extreme possibility of cutting to 54 holes.

That said, the intent is to continue as planned and monitor the storm before making a final decision. Meantime, there have been no cooling showers as the heat index reached a week-high of 43C/109F. With more of the same expected on Friday, the field will be starting on both the 1st and 10th tees.

For now, though, it's all about the 23-year-old Korda, who stands at 67-62—129, 13 under par. Remarkably, she opened with four straight pars before (heat reference) torching the East Course front nine with a birdie-eagle-birdie-birdie-birdie stretch to make the turn in 30. Then, after two more pars to start the back nine, she birdied five of the next six holes before coming to the par-4 18th.

The trouble began with a tee shot into the right rough which forced her to punch out to the fairway. But her approach fell just short of the green in a bunker. "I just got a little too cute with that pitch shot," said Korda, who then blasted out and two-putted for the 6.

Afterward, she said she wasn't thinking about the possibility of breaking 60, more so that "I was like, oh, cool, I have a pretty good lead going into 18. But unfortunate that double on 18, but that's golf and that's just how it goes sometimes.

"I had a really good stretch of holes," she continued. "I think I was like 4-under or 5-under through four holes at one point on the back. Or on the front. The heat's getting to me. I just stayed really solid today. On the front I was definitely hitting it better and on the back, I wasn't hitting it as well but making the longer putts."

It still tied the women's Olympic record of 62 set by Russian Maria Verchenova at the 2016 Rio Games, and opened the four-stroke lead over three players: Nanna Koerstz Madsen of Denmark (69-64), Aditi Ashok of India (67-66) and Madsen's teammate, Emily Kristine Pedersen (70-63). Madsen and Ashok were in the day's first group and Pedersen teed off two groups later. Another stroke back is first-round leader Madelene Sagstrom of Sweden (66-68).

The 26-year-old Madsen shot up the leaderboard first with a six-hole stretch of six under par with four birdies and an eagle-3 on No. 8. "I had a good run on the front nine. Made three birdies and an eagle in a row," she said. "So I got to 6-under through 8. I was playing pretty good. Then on the back nine I was still playing all right, I just didn't -- I had some good chances I didn't make but I was still happy with the back nine."

Perhaps the key to Madsen's round was that she didn't have to rely on the sour taste of lemon wedges that are tucked in her golf bag. She's relied on the unusual regime of biting a lemon to check her emotions and notoriously quick temper when she senses things are beginning to unravel internally. But that certainly wasn't the case on Thursday, when her round was more like refreshing lemonade.

With that early scoring streak, she caught and passed Sagstrom and remained at or near the top for the rest of the day, which she ended with a 4-foot birdie putt on No. 18.

Playing alongside her was Ashok, who at 18 was the youngest golfer at the 2016 Rio Olympics. Now a mature and battle-tested 23-year-old, she continued her outstanding play with a steady, bogey-free round with five birdies, including on the final two holes. The one on No. 18 matched Madsen's own, though Ashok's barely carried the water before rolling to six feet.

"The last three holes I had a couple shots that were just a good number for me and I hadn't really had any short approaches all day, maybe just a couple," Ashok said. "So, yeah it was good to have the same number like two times and hit a couple of good putts as well."

Regarding her 7-iron approach to No. 18, she said, "I hit it like a hair thin than I wanted to, but yeah, according to the number it should have flown and it did so it's all good."

Ashok steadily played her own game, which is shorter and has required hitting hybrids into a number of greens. Still, through two days, she has made 10 birdies and just one bogey to close the first round. "I didn't hit as many as yesterday, but still probably hit five or six hybrids," she said.

Pedersen's own outstanding round of 8 under par featured eight birdies, an eagle-2 and two bogeys. "I was wedging it really well today, which gave me a lot of chances for birdie," she said. "Then I had a really hot putter today and that's kind of what made the score, I feel like." The eagle, though, came from a 3-wood tee shot to eight feet on the shortened 248-yard 6th hole.

It was the same club that Korda used for her eagle on the same hole, which came on a 25-foot putt. And it proved to be the catalyst to a remarkable day. Though No. 18 cost her the six-stroke lead she had built, she is ready for whatever comes next.

"I'm going to have the mindset that it's going to be a 72-hole tournament and whatever happens, happens," Korda said.

More in this category: « Kyle Blignaut takes sixth place in Olympic shot put final. Korda retains lead while Ashok continues to show grit and determination as her closest pursuer. »
back to top