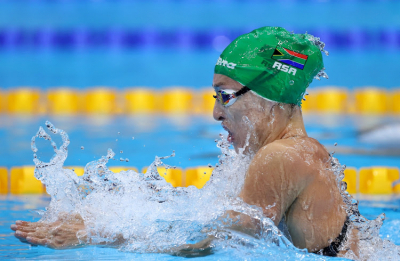 The 21-year-old started slowly and was content to stay towards the back of the pack in the first half of the race before working his way up the ranks to secure a top-10 spot in his first Olympics.

"I didn’t know where I was to be honest and then when I touched everyone was like ‘eighth’. So I’m very happy with that. I can’t complain about that," said McGlynn afterwards.

'I trained really hard for this. I think everyone has pre-race nerves and you’ve got to just try and use that to your advantage. I got here about 10 days ago. So you’re watching the pool swimming and it’s building up the anticipation and everything, then your race comes and it’s like now I’ve got to come here and do my own job. Thankfully it worked out today.

"The heat was the biggest challenge for sure and trying to stay calm because I think you can get overconfident and maybe overswim it in the front half, but I started picking off one by one and went with that tactic.

"I don’t think it’s really sunk in yet – like I’m eighth in the world. I’m sure when I get to bed tonight, I’ll be very happy, "added the Durban swimmer.

SA coach Wayne Riddin was thrilled with McGlynn’s eighth place. “I think we have a potential winner here for future years,” he said afterwards. "He’s just got that easy and relaxed stroke – he’s so high in the water and if the conditions get rougher, he gets better so I just think the 10km is a really exciting race for him," said Riddin.

A day before two-time Olympian Michelle Weber struggled with the steamy conditions and finished in 21st place in the women’s race which was won by Brazil’s Ana Marcela Cunha.

"The race was tricky, very different to anything I’m used to. The water temperature was 29 degrees so it was a very, very hot swim but it’s been such an awesome experience to be here and be on the biggest sporting stage and I feel so blessed," said Weber.

"I’m so glad I got to experience this with the team but now it’s back to the drawing board to come back stronger for the next one."

Riddin hailed both swimmers for their performances in Tokyo.

"Both Michelle and Michael have done particularly well but for Michael who was battling to find a pool to even train in before coming here, I think it’s an absolutely amazing performance and he’s very happy. He stuck to a race plan and doing that at a championships like this is what it’s all about so I hope he learnt a lot.

"If we look after a person like him, I think we can take him a lot further. He’s got to go and race with these guys more often. This is the first real race he’s had outside of the qualifier in Portugal.

"But this type of performance – anything in the top 10 at this level – is like getting on the podium," added Riddin.

Speaking about the overall performance of SA swimmers in Tokyo, which has included Tatjana Schoenmaker’s gold in world record time in the 200m breaststroke and a silver in the 100m breaststroke, Riddin added: "I was there in London when Chad [le Clos] got gold and silver and Cameron [van der Burgh] got gold and broke a world record, the hype was high. We’ve had a similar thing here, but we’ve had a few extras with it like Kaylene Corbett’s performance [reaching the 200m breaststroke final] and now Michael’s performance, so ending on a high note for aquatics on our side is absolutely amazing."