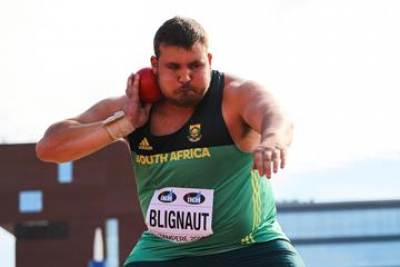 Delivering one of the best performances of the Games by the SA team, Kyle Blignaut put up a brave fight in the men's shot put final at the Tokyo Olympics on Thursday.

The 21-year-old former world junior champion was satisfied with his result in a hard-fought battle which was won by American giant Ryan Crouser with a 23.30m heave, just seven centimetres shy of his own world record.

"I think shot put is at an all-time high at the moment, so to be in the top six in the world at a major championship, I feel like that's an awesome achievement, "Blignaut said.

On the track, the SA men's 4x100m relay team was eliminated after failing to finish their heat.

Following a late change to the squad, after in-form athlete Gift Leotlela picked up an injury and had to be replaced, the quartet of Clarence Munyai, Shaun Maswanganyi, Chederick van Wyk and Akani Simbine, did not finish their race after failing to complete the first changeover.

More in this category: « South African's 4x100m relay team drop baton in heats. No one was hotter than Nelly Korda on, quite literally, a blistering day. »
back to top