Korda retains lead while Ashok continues to show grit and determination as her closest pursuer. 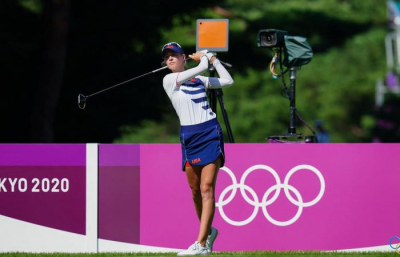 Kawagoe, Japan – So, the long and short of the women's Olympic golf competition heading into Saturday's final round at Kasumigaseki Country Club is this: American Nelly Korda and Aditi Ashok of India.

It's the difference between the two 23-year-olds, leader Korda at 15-under par 198 and second-place Ashok at 12-under 201, that makes this so fascinating. On paper, they arrived there with similar-looking rounds of 69 and 68, respectively. But when they say looks can be deceiving, it couldn't be truer than in the comparison between the two heading into Saturday's final-round chase for Olympic gold ... and silver, and bronze.

Next in line are four players at 10-under: 2016 silver medalist Lydia Ko of New Zealand (66), Japan hopeful Mone Inami (68), Hannah Green of Australia (67) and Emily Kristine Pedersen of Denmark (70).

Statistically speaking, it doesn't seem like a fair fight between the two leaders. While world No. 1 Korda is bombing drives and hitting short irons throughout the East Course, Ashok is dinking drives and relying on hybrids to reach a number of holes, with at least five par-4s typically measuring over 400 yards. Korda is averaging a full 44 yards further than Ashok, who is second-to-last in the field with a 233-yard average.

And yet, she makes it work with a keen understanding of her limitations and strengths. She still hit 17 of 18 greens, four more than Korda in round three. And then there's her putting, the very thing she practiced endlessly when first introduced to the game.

"She's a really solid putter," said Korda after they played together. "Like she's a sneaky player. She putts incredibly well. She rolls it really nicely and there's this kind of like confidence she has on the putting green. She has some kind of swag on the putting green and she owns it."

That said, Ashok said she's actually about 15 yards shorter than normal at the moment and revealed for the first time that she had COVID in May and June.

"I do think it took a little bit of strength out of me. I was never this short. I was always short but not like 50 behind Nelly and 50 behind Nanna," Ashok said, referring to Nanna Koerstz Madsen, the third Friday's final grouping.

Which makes her performance this week even more remarkable.

Entering the day tied for second with the two Danes, Ashok spent most of the day as the primary suitor to Korda's lead, supported by her mother who is caddying in place of her usual looper, her father.

"She's doing great," Ashok said. "It's funny, this is the best I've played all year." Asked if her dad is now out of a job, she said, "No, my dad's good," she said. "He's enjoying watching me on TV and he enjoys listening to Bones (Jim Mackay) commentate on my game. It's funny because he never gets to see me play on TV, he's always caddying. So that's been cool. My mom has obviously done a great job this week."

Ashok was caught and briefly passed by Imani, but a bogey by Imani on No. 18 and birdie by Ashok on 17 flipped the leaderboard in Ashok's favor.

After the disappointment of not medaling in the men's competition after Japan's Hideki Matsuyama entered the final round one stroke behind eventual gold medalist Xander Schauffele of the USA, the host country's main medal hope rests with Inami. "I had a lot of fun today," she said. "The only thing was on the final hole I misread the putt which caused a bogey. But otherwise, I had a really good day."

All this was happening ahead of Korda, who never lost her lead, though she didn't have nearly the day she did on Thursday when she tied the women's Olympic record of 62 and flirted with a 59 before making double bogey on the final hole.

On Friday, she made three early birdies to open a brief five-stroke lead, but after a bogey-6 on No. 8, she parred the remaining holes.

"It was very upsetting that I bogeyed a par-5, there's something inside of me when I bogey a par-5 that I just get so frustrated about because I shouldn't be doing that," Korda said. "I kept telling myself that there's more opportunities ahead."

But they never came. "I didn't have a really good back nine, I was kind of spraying it all over the place, I had some testy par putts, but made all pars and I fought really hard to stay in it really or ahead of it," she added. "I made some mistakes, but it wasn't really easy out there with the positions I was in."

Korda was obviously hoping to further distance herself from the field, saying, "I feel like that's kind of the goal going into every round is to play the best I possibly can and maybe get a comfortable lead. But that's the thing about golf, once you get a little too comfortable it humbles you when you start making mistakes and you get ahead of yourself. So, yeah, I would have loved to have had -- I mean obviously no one's ever going to complain about a bigger lead going into a final round, but I'm happy with where I'm at."

But she still has the lead, and the confidence heading into Saturday's final round, which gets a nice early start at 6:30 a.m. on the 1st and 10th tees to try to beat the predicted heavy rains from a tropical storm headed toward Japan.

But Korda says she won't play with an additional sense of more urgency.

"No. My mindset is 72 holes so I'm sticking to that," she said. "I'm trying to give myself opportunities and make them, that's all. I'm trying to stay as present as possible and see how it goes."

More in this category: « No one was hotter than Nelly Korda on, quite literally, a blistering day. USA's Nelly Korda wins gold on dramatic final day of Olympic golf. »
back to top