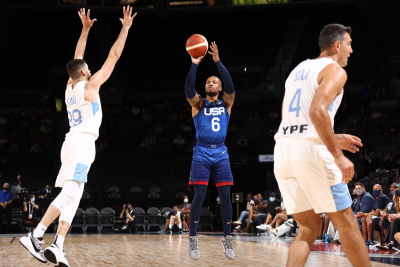 Kevin Durant scored 29 points and joined Carmelo Anthony as the only three-time men's gold medallists in Olympic basketball history after the U.S. held off France 87-82 on Saturday morning in Saitama, ending a summer that started with sputters but closed with celebration.

Durant sealed it by knocking down two free throws with 8.8 seconds left, making the outcome academic. The lead was five, France's final possession was irrelevant, and it was over. The U.S. players gathered for a hug at midcourt, Durant, Bam Adebayo and Draymond Green wrapped themselves in American flags, and the journey was complete.

Jayson Tatum, on fire off the bench, finished with 19 points, while Damian Lillard and Jrue Holiday each scored 11 for the U.S.

Evan Fournier and Rudy Gobert each put up 16 points for France, a country which now has four silver medals - all coming after gold medal game defeats to the U.S. Guerschon Yabusele scored 13, Nando de Colo had 12 and Timothe Luwawu-Cabarrot scored 11.

From there, it was just a matter of finishing the job. The summer started with two exhibition losses, the Olympics with a loss to France, but none of that seemed to matter much at the end.

The mission was accomplished: Gold, again. The 16th time in 19 Olympic tries for the U.S.