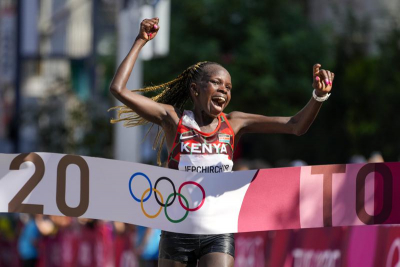 Peres Jepchirchir won the women's marathon at Tokyo 2020 as Kenya claimed a one-two in sweltering conditions in Japan's northern city of Sapporo.

"I’m going to say too hot,” said Jepchirchir, who gave Kenya back-to-back Olympic gold medals. "Despite the challenge of the weather, it was good."

The prevailing thought: Thank goodness for the time change. Seidel was at dinner when she heard the news.

"My jaw just dropped," she said. "I immediately got up and went to bed."

The Kenyan team boasted three of the five fastest female marathon runners of all time, but world champion Ruth Chepngetich - who defied the heat and humidity of Doha in 2019 to win gold - pulled up after losing touch with the leaders at 30km.

Jepchirchir and Kosgei were joined by Seidel and Salpeter in the lead group with five kilometres remaining, before the Kenyan pair moved clear and Seidel pushed on following European 10,000m champion Salpeter's abrupt withdrawal to win bronze in just her third outing over the distance.

There were 88 runners entered in the field and 15 recorded a "did not finish." That included world champion Ruth Chepngetich of Kenya.