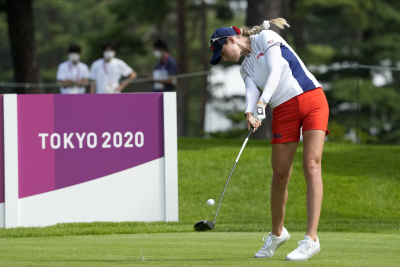 Three shots ahead overnight, Korda's lead was down to a single shot when play was suspended for 49 minutes because of a tropical storm with one hole to play.

But the 23-year-old world number one held her nerve to par the 18th for a two-under 69 and a 17-under total that held off Japan's Mone Inami and New Zealand's Lydia Ko.

Inami then beat Rio silver-medallist Ko on the first hole of a play-off to secure the silver medal.

India's Aditi Ashok, the world number 200 who had been second after three rounds, finished one shot further back in fourth.

Ireland's Stephanie Meadow finished seventh on 12 under after a final-round 66, while Team GB's Jodie Ewart-Shadoff and Melissa Reid were 40th and 55th respectively.

Korda began her final round confidently, sinking a long birdie putt on the first, but a double-bogey on the par-three seventh opened the door and although she immediately birdied the eighth that was only enough for a share of the lead with Ashok and the charging Ko.

The American birdied again at the next and reopened a three-shot lead as Ko made successive bogeys on 10 and 11, only for home favourite Inami to begin her late bid for glory.

Playing in the group ahead of Korda, the world number 28 made five birdies between the 12th and 17th for a six-under final-round 65 and briefly a share of the lead, but it was a bogey on the last that was to prove decisive, Korda sitting out the weather delay before two-putting from just inside 30 feet for gold.

Korda, whose tennis-playing father Petr won the Australian Open in 1998, was joined in her celebrations by older sister Jessica, who finished in a tie for 15th after shooting a seven-under 64.