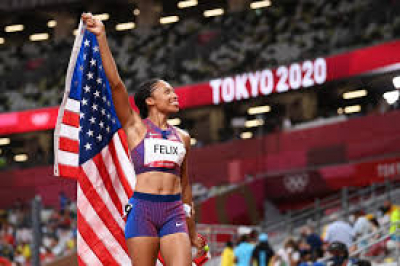 Allyson Felix overtook Carl Lewis as the most decorated American track and field athlete after helping Team USA to Olympic gold in the 4x400m relay.

The 35-year-old had already become the most decorated female track and field Olympian ever with a bronze in the 400m on Friday and this relay gold took her medal tally to 11.

That moved her ahead of Lewis and one behind Finland's Paavo Nurmi who set the mark in the 1920s.

This was Felix's fifth and final Games.

They romped home in three minutes 16.85 seconds, with Poland taking silver and Jamaica getting the bronze.

Meanwhile the United States men's team won their first gold in athletics at the Tokyo Olympics on Saturday, clinching the 4x400 metres relay by a massive margin.

Netherlands took the silver medal in a national record time of 2:57.18 and Botswana claimed the bronze.

Elsewhere Italy capped a historic week on Friday by winning a shock gold in the men’s sprint relay, while Canada won their first gold medal in women’s football after previously taking the bronze in 2012 and 2016.

Kenya’s Faith Kipyegon relegated Hassan to bronze in retaining her 1,500 metres title, while Shaunae Miller-Uibo was another repeat winner in the women’s 400 metres.

Italy, who had a night to remember when they lifted the individual 100 metres and men’s high jump on Sunday, had already enjoyed a good start to the day when Antonella Palmisano won the women’s 20km walk, her training partner Massimo Stano having taken the men’s event on Thursday.

But that was a mere antipasto for an incredible main course of a 4×100 metres relay that demanded a full house instead of a few noisy team-mates in the stands.

In the absence of the United States and with Jamaica fumbling their changeovers, Britain looked nailed on for victory with metres to go, only for Filippo Tortu to somehow surge past to take gold by one-100th of a second.

With Lamont Marcell Jacobs, Italy’s shock 100 metres champion, running second, the Italians set a national record of 37.50 as they won the event for the first time, having last reached the podium 73 years ago.

It took their athletics tally of gold medals this year to five – surpassing their previous best of three.

If that race was a surprise, the women’s relay went as widely predicted as the three individual medallists in the 100 metres – Elaine Thompson-Herah, who now has all three available sprint golds at Tokyo, Shelly-Ann Fraser-Pryce, and Shericka Jackson – along with Briana Williams, ran a national record 41.02 seconds.

They marked Jamaican Independence Day by finishing well clear of the United States and Britain.