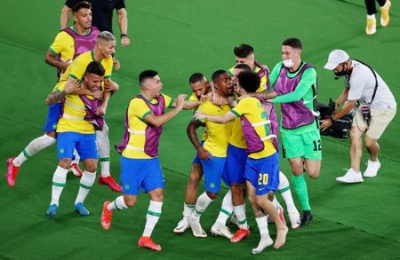 It took a goal deep in extra-time from super-sub Malcom to see Brazil beat Spain 2-1 and claim their second (and second-straight) gold medal in men’s Olympic football at the International Stadium Yokohama.

The deciding strike, scored from a tight angle, settled the heavyweight contest after regular time ended tangled at 1-1 thanks to earlier goals from Spain’s Mikel Oyarzabal and Brazilian star Matheus Cunha.

The first quarter-hour of the game saw little by way of attack as both teams – the two best sides at these Olympic men’s football finals – looked to size each other up.

But in the 16th minute, Brazil’s Diego Carlos had to be alert to keep the ball out of his own goal when he slid to intervene after a bit of sharp interplay between Oyarzabal and Dani Olmo. The Brazilian’s goal-line clearance was a clever bit of improvisation that kept the scores level at nil-all.

Four minutes after that, Spain’s senior No1 goalkeeper Unai Simon had to dive low to his right to keep out a clever toe-poked shot from Matheus Cunha.

But it wasn't until the 38th minute that the first clear chance of the game materialised. After a lengthy VAR review, Australian referee Chris Beath awarded Brazil a penalty kick for a foul by Simon, who raced off his line and tried for the ball, but caught Cunha on the chin instead.

The Spaniards, and their goalkeeper, breathed a big sigh of relief when Richarlison, the tournament’s top-scorer, blazed over the crossbar with his poor effort from the spot.

The Brazilian sadness didn’t last long though as the defending Olympic champions managed to find the back of the net before the half was over.

Marc Cucurella switched off in defense, allowing 38-year-old Brazil captain Dani Alves to sneak in and lay in a low cross for Cunha, who worked himself away from his marker and buried a shot low inside Simon’s post to send the South Americans to the changing rooms with a slender lead.

When action resumed, Richarlison almost made amends for his penalty miss in the 52nd minute. But his effort from close range took a deflection off Simon and could only splatter against the crossbar.

The Spaniards, off the hook from nearly being down 2-0, found an equaliser just after the hour mark thanks to the outstanding Oyarzabal, who’s following up his break-out performance at the recent UEFA EURO with a smashing Olympic Games. Racing in from the left, he met a Carlos Soler cross from the right with a sliding left-footed volley past Santos that will go down in the annals of Olympic football finals’ best-ever goals.

And it was the Spaniards who finished strongest as the clock ticked toward the 90th minute, but substitute Bryan Gil’s sizzling volley from distance rattled the Brazilian crossbar as the second football final of these Olympic Games went to extra-time.

The first session was predictably cautious, as neither side looked willing to risk making the mistake that might cost them the Games’ top prize. But in the second, the injection of Zenit St. Petersburg man Malcom made all the difference for Brazil.

He chased down a long ball from midfield in the 108th minute, muscled past Jesus Vallejo and snuck the ball, from an acute angle, past Simon, who managed to get a hand to it.

Brazil (gold) and Spain (silver) were joined on the podium by Mexico, who beat hosts Japan 3-1 on 6 August to scoop bronze – a second Olympic medal for the North Americans after their shock gold in London in 2012.