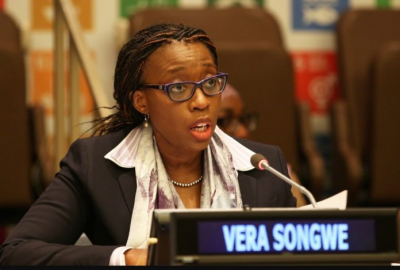 Africa does not need a Marshall Plan to ride out the ongoing coronavirus crisis. It has a more powerful tool in the African Continental Free Trade Area (AfCFTA) to use in accelerating regional and economic integration and prepare for uncertain times.

This was said Tuesday by Ms. Vera Songwe, Executive Secretary of the Economic Commission for Africa (ECA), in a virtual panel discussion to mark the inaugural Africa Integration Day that was set aside by the African Union to mark the implementation of the AfCFTA.

Integration, said Ms. Songwe, is key for Africa’s growth and attainment of Agenda 2030 for sustainable development and Africa’s development aspirations as found in Agenda 2063.

“We need to talk about Africa and the AfCFTA. Our Marshall Plan is the AfCFTA. The AfCFTA is our plan so let us take it and run with it,” she said.

Ms. Songwe said with the AfCFTA, Africa had collectively penned its own blueprint for growth.

“The Marshall Plan for Europe was about 160 percent of their GDP traded to bring back growth after the war. What happened to us is that we were all waiting for a health crisis but we got an economic crisis first which was very steep, very deep, not just for us but for the rest of the world,” she said.

Ms. Songwe said the ECA estimates that economic growth in Africa in 2020 will drop from 3.2 percent to -2.8 percent to about zero percent growth as a result of COVID-19, a situation she described as disastrous, throwing an extra 20 million people into poverty in a continent where almost 300 million people cannot afford one meal a day.

“COVID came and has taken us quite far behind because we need to reassess where is it that we want to go and how we want to go. We definitely need to do things differently,” she said.

Ms. Songwe added that it was crucial for Africa to integrate its financial systems to create a mutualized system of financial stability that works for the continent or regional monetary cooperation as in East Asia.

“The Afreximbank Exchange Facility is an excellent step in the right direction. But more is needed to integrate our economies and financial sectors,” the Executive Secretary said.

This means “when there is a crisis we come together and we pull and mutualize our resources so that those who are the most hit get some resources”.

“So we do not need to go the long distance of common currency to get a mutualized system of financial stability that works for the continent. We need to ensure that as we build the AfCFTA and trade integration, we begin to build stronger, much more robust monetary and fiscal systems that can ensure that as a continent we actually can work with each other in a more effective way,” Ms. Songwe added.

She shared with the panel what the ECA has been doing since the crisis began in helping African nations, the private sector and civil society to understand and draw strategies to contain the pandemic and prepare for building back better.

Ms. Songwe said COVID-19 has given Africa an opportunity to assess its weak health delivery systems with countries like South Africa, Ethiopia, Morocco and others building new health infrastructure.

Africa must produce internally, said Ms. Songwe. The continent imports $14.7 billion worth of drugs, over 95 percent of its demand. She said countries like Egypt, Kenya, South Africa, Ethiopia and Cameroon can produce drugs for the continent, adding what needs to be worked on are Intellectual Property Rights issues.

The panelists agreed that the AfCFTA was the best stimulus for Africa to come out of the COVID-19 pandemic. They also agreed the crisis was a great opportunity the continent should not waste, in particular using lessons learned for Africa’s industrial development; produce its own drugs and save billions of dollars in the process; digital inclusion is paramount; and working closer together than ever as one united Africa with the private sector too, among others.

Africa may have lost some momentum on its quest to achieve the sustainable development goals by 2030 due to the ongoing coronavirus pandemic but the continent can fast track and get back on track, said Ms. Vera Songwe, Executive Secretary of the Economic Commission for Africa (ECA), said Tuesday.

In a virtual conversation with Zeinab Badawi during the CDC’s Annual Review 2019 in which she provided a macro-economic perspective on the impact of the COVID-19 pandemic on Africa, Ms. Songwe said there was a lot that can be done through partnerships and collaboration to ensure Africa regains lost ground in the aftermath of COVID-19.

“What Africa has shown in this crisis, even as we talk about the debt conversation, is the fact that we have matured. We are not talking about debt cancellation. We are talking about a bridge to get over the crisis for many of our countries,” she said.

Added Ms. Songwe: “We could have lost some momentum on 2030 but if we all come back together quickly, we may not have lost that much and we can use that as an opportunity to fast track a few things.”

She shared with the audience, among them representatives from across the United Kingdom government, parliamentarians, policy makers, academics, NGO leaders and impact investors as well as representatives from multilateral and bilateral organisations, initiatives being undertaken by the ECA and its partners to help Africa contain effects of the health crisis.

This includes the debt standstill call for all African nations, the Africa Communication and Information Platform for Health and Economic Action (ACIP), the African Continental Free Trade Area (AfCFTA) pharma initiative, and others.

ACIP is a mobile based tool for two-way information and communication between citizens and governments. It furnishes national and regional COVID task forces with user-generated survey data and actionable health and economic insights that will enable authorities to better analyze pandemic-related problems and implement appropriate responses.

The AfCFTA-anchored Pharma Initiative is a pilot project that seeks to develop the capacity of African countries to ease the burden on their health systems through localized production of medicines, pooled procurement, and a harmonized regulatory and quality framework.

“We are beginning to use telecommunications more to provide information and we can use ACIP for digital ID down the road as well. These are huge investments in ICT that are going to be needed,” Ms. Songwe said, adding the CDC should invest in energy and ICT in Africa, besides shoring up existing businesses; ensuring more risk sharing, injecting liquidity and making payment moratoriums for firms they work with on the continent.

“We need to keep investing in infrastructure investment,” she said, adding Africa was switching from more fossil-based fuels to cleaner forms of energy like gas.

“We are now at 40 percent of gas consumption. We need to do more of that. It’s much cheaper, much more stable and its generation could improve development on the continent,” Ms. Songwe said, adding gas remained critical to electricity generation in Africa and was a key generation fuel that can catalyse the continent’s clean energy transformation.

This, she said, gives African countries the opportunity to phase out more polluting fuels and bring on board more renewables.

On the need to create a new sustainability and liquidity facility to cut borrowing costs for African governments by providing incentives for the private sector to increase their own investment portfolios on the continent and accelerate job creation, Ms. Songwe said:

“I don’t think that Africa’s problem is the debt problem. Africa’s problem today is the liquidity problem. If we do not solve the liquidity problem, we will drop into solvency problems and from the debt cause other problems. When we talk about debt on the continent we always take it as something negative. You need to be able to borrow to be able to grow… the question is about the rate of return on the investment and this is where the question of getting cheaper rates comes in.”

She said Africa will grow faster and get people out of poverty faster with private investments at much cheaper rates, adding work was underway to attract a new kind of investor to the continent.

For his part, CDC Chief Executive Officer, Nick O’Donohoe, said aside from the obvious health crisis that Africa is going through, there was huge economic damage caused by coronavirus.

“This is a huge economic issue for Africa and it is really important at a time like this. Inevitably when crises happen, investors around the world become more risk averse and as they become risk averse their first reaction is to take money away from those places that are farthest away, perhaps they know least about and perceive to have the greatest risk and that’s what has happened in Africa.”

He said the role of the development finance institutions like the CDC in such circumstances is to step forward to fill the gap of commercial money being withdrawn.

“The first role is to make sure that those great companies that are going through this extraordinary crisis have the working capital and the liquidity they need to survive and that has been a key focus for CDC. We try to step up with our banking partners to provide more liquidity,” said Mr. O’Donohoe.

Yasemin Lamy, Deputy Chief Investment Officer at the CDC, said since the COVID-19 outbreak, CDC has focused on preserving jobs in countries they have invested in; adopted systematic injection of liquidity; and is focusing on rebuilding for impact. Working capital is being provided for women and small to medium enterprises to preserve jobs, among other initiatives.

The review was held under the theme; Towards a decade of action: 10 years to achieve the Sustainable Development Goals. The CDC is the UK's development finance institution.

More in this category: « Leadership in Crisis ~ Lessons learned From Uganda. Preventing COVID-19 from becoming a hunger crisis in Africa. »
back to top