Celebrating Women with a Difference, in 2020. 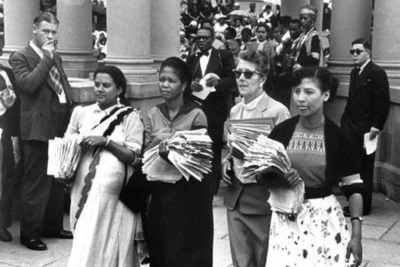 Every day there is cause to celebrate women the world over, to acknowledge their sacrifices and their contributions to humanity, our countries’ freedoms, our community’s growth and development and ultimately, our families’ being and comfort.

In South Africa, the 9th of August is set aside as Women’s Day, a national and public holiday while during the whole month of August the nation pays tribute to and celebrates our women, be they our foremothers, grandmothers, mothers, wives, daughters, sisters and friends. Among the women are our activists, our feminists, political leaders, our educators, healthcare professionals and caregivers. They are leaders in the boardrooms of our corporate sector, and they sit on judicial benches across the legal strata. They seek to be the voice of reason and guidance in our parliament and push for real service delivery in our public services sector. They are on pulpits and on their knees; they lead in the physical and they guide in the spiritual realms.

The celebration, recognition and acknowledgement of women this year is particularly special. As Ambassador Nozipho January-Bardill tells it, she had a vision that would culminate in a special festivity this year. In her soft-spoken voice that, nonetheless, carries a measure of authority she explains,In 1995, women from all over the world met in Beijing at the 4th UN Women’s World Conference at which the Beijing Platform for Action, BPfA, was unveiled and adopted. This year marks 25 years since Beijing. Looking back, we have a great deal to be proud of. A range of milestones and achievements led by African women across the continent have exemplified the values and principles espoused in the BPfA.

What is even more remarkable and worthy of a double celebration is the number of young women leaders.  Many of them were babies or not even born at the time of the Beijing Conference but their leadership approaches, commitment and achievements completely align with the BPfA. This is confirmation that we did not go to Beijing to find out how to lead our families, communities and countries towards a more equitable and sustainable existence, nor to look for the means to attain social justice. No, we went to Beijing to pledge our unified purpose, to make a universal commitment towards peace and development for the good of all humanity. Beijing was the sounding of the chorus of women’s voices from around the world because we have more in common than was hitherto imagined.

With that in mind, Ambassador January-Bardill invited Louisa Mogudi, a former lecturer at UNISA and social entrepreneur and Rose Ssali, Managing Director of Ssali Publishing House, to publish a commemorative coffee table book showcasing 50-plus African Women Leaders from across Africa.

The plan to launch the book, Write2Speak, Amplifying the Voices, Lives, Rights and Experiences of African Women, at the UN Women’s Conference (UNW) in Paris, France this past July was canned because of COVID-19.  The launch is now targeted for next month during the actual anniversary of the Beijing conference and between the 4-18 September 2020.  Our intention is also to support the UNW Campaign: Generation Equality- Realizing Women’s Rights for an Equal Future.

Thanks to our partnership with UNISA Press, the coffee table book will be available both online, at local vendors and in collaboration with our contributors and our networks, right across the continent and worldwide.

With women from over 25 countries, traversing an age bracket between 16 and over 70 years, the stories are as varied as they come and yet, there are those threads that run through every story bringing to the fore the desire of women across the board, to see social justice, to see us live in peace and to see development become a reality rather than remain a subject of research, an issue for debate or a bone of contention between nations, and political parties.

Do we have reason to celebrate 25 years post-Beijing?

The answer given by these 50-plus women is, YES, we do! Their achievements confirm it, those they have led and more so those whose lives they have changed, agree. Are we there yet? The BPfA was a roadmap rather than a destination. It is the reason that the African Union's Agenda 2063 and the UN 2030 Global Goals are, for many countries in Africa,  a light at the end of the tunnel that has remained unilluminated for far too long, with dreams of freedom from colonization becoming political nightmares and national development plans collecting dust on shelves in government archives.   It is the reason we believe that we will attain much more than the visions espoused in both the continental and global goals, perhaps even ahead of schedule. Looking at the gains we have made in 25 years, the road to social justice, peace and development without sidelining half the continent’s population is not only a possibility, it is our reality!

More in this category: « Preventing COVID-19 from becoming a hunger crisis in Africa. We are all in it together - COVID-19 Pandemic. »
back to top