Xenophobia in South Africa and the Travesty of Regional Cooperation. 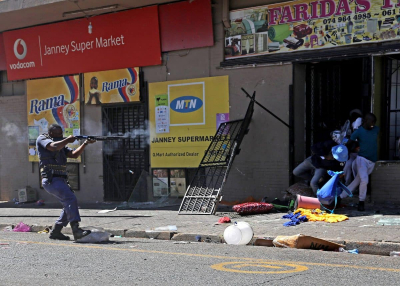 In January 2018, the Assembly of African Heads of State and Government adopted the Protocol on Free Movement of Persons in Africa, its implementation roadmap and the development of the African passport. The African Union Commission then embarked on a series of activities to promote the ratification of the Protocol by Member States.

Undoubtedly, there was progress as was evident when the Agreement establishing the African Continental Free Trade Agreement (AfCFTA) entered into force on 30 May 2019. The official objectives behind the AfCFTA are...

To boost intra-African trade, to create a single market for goods and services (through successive rounds of negotiations), to contribute to the movement of capital and natural persons,and to move the process to a point where a long-standing political ideal will materialize, namely to lay the foundation for the establishment of a Continental Customs Union....

In order to facilitate the individual nation’s development and therefore, boost the collective nations that form the continental partners, the treaty would harness the demographic dividend of the fast growing population of young people on the continent. Further, it has been noted that free movement of persons would allow ease of mobility for the youth and unleash their potential as the driving force for the economic and social integration in Africa.

Envisaging unparalleled benefits, the free movement of persons and the African Passport is one of the flagship projects of Agenda 2063. African leaders aspire for:

...a continent where free movement of people, capital, goods and services will result in significant increases in trade and investments among African countries rising to unprecedented levels and strengthen Africa’s place in global trade.

With all these agreements, treaties, conferences and seminars it is particularly disturbing to see what has lit up Social Media over the last week or so. The issue we must address urgently is this:

Heads of state can meet and sign an enviable array of treaties and agreements. However, if the conduct our citizens is anything to go by, it would seem that we are speedily moving away from the goals outlined by Agenda 2063 and not towards them.

Yes, the treaties and agreements are very important but they must go hand in hand with civic awareness among our peoples. If free movement of people, capital, goods and services is ever to become a reality, civic training must complement political decisions.

Despite our professed commitment to the ambitious Agenda 2063, or even the African Continental Free Trade Agreement (AfCFTA), we continue to orchestrate xenophobic behaviour towards Africans from other countries.Here is the disconnect:

According to documents found in the public domain on the African Continental Free Trade Agreement (AfCFTA),

The 18th Ordinary Session of the Assembly of Heads of State and Government of the African Union, held in Addis Ababa, Ethiopia in January 2012, adopted a decision to establish a Continental Free Trade Area by an indicative date of 2017. This deadline was, however, not met. The Summit also endorsed the Action Plan on Boosting Intra-Africa Trade (BIAT) which identifies seven priority action clusters: trade policy, trade facilitation, productive capacity, trade related infrastructure, trade finance, trade information, and factor market integration.

The AfCFTA will bring together all 55 member states of the African Union covering a market of more than 1.2 billion people, including a growing middle class, and a combined gross domestic product (GDP) of more than US$3.4 trillion. In terms of numbers of participating countries, the AfCFTA will be the world’s largest free trade area since the formation of the World Trade Organization. Estimates from the Economic Commission for Africa (UNECA) suggest that the AfCFTA has the potential both to boost intra-African trade by 52.3 percent by eliminating import duties, and to double this trade if non-tariff barriers are also reduced.

African leaders held an Extraordinary Summit on the African Continental Free Trade Area (AfCFTA) from 17-21 March 2018 in Kigali, Rwanda, during which the Agreement establishing the AfCFTA was presented for signature, along with the Kigali Declaration and the Protocol to the Treaty Establishing the African Economic Community relating to the Free Movement of Persons, Right to Residence and Right to Establishment.In total, 44 out of the 55 AU member states signed the consolidated text of the AfCFTA Agreement, 47 signed the Kigali Declaration and 30 signed the Protocol on Free Movement.

Let me address just one ideal as set out above:

Estimates from the Economic Commission for Africa (UNECA) suggest that the AfCFTA has the potential both to boost intra-African trade by 52.3 percent by eliminating import duties, and to double this trade if non-tariff barriers are also reduced...

In other words, if we, conscientiously and diligently, pursue the goals laid out in AfCFTA, we can boost Africa’s intra-African trade by 52.3 percent with the potential to double it!

At the height of the Rwandan Genocide in 1994, there were those who could and should have spoken out. They did not, and nearly a million people died in a hundred days. The world reeled from the horror when the true accounts were revealed. Then when Hotel Rwanda was released and shown in movie theatres, people were heartbroken and could be heard sobbing. The grief of many movie goers lasted only until the credits rolled. For many, the emotion was momentary because this was not their reality.The Rwanda genocide became, for some,simply a conversation-starter.The world swore it would never forget and it would never again turn a blind eye while people are killed with impunity.

Well, here we are again, on African soil, with lives being lost, needlessly, while the world watches and perhaps, cries out for a moment or two. Perhaps the distinction is that while in Rwanda it was warring tribes of one nation, in South Africa’s case, it is nationals against foreigners; foreigners from their regional partners; members of the world’s largest free trade area since the formation of the World Trade Organization,signatories to the documents that will propel Africa into an economic superpower between now and 2063... Maybe.

Africa, one thing is very clear: we are not on the same proverbial page!

More in this category: « What challenges do SA and German journalism both face? The Future of Journalism,a series by the Goethe-Institut SA. Thabo Mbeki weighs in on the major disruption and upheaval in the Democratic Alliance. »
back to top