Thabo Mbeki weighs in on the major disruption and upheaval in the Democratic Alliance. 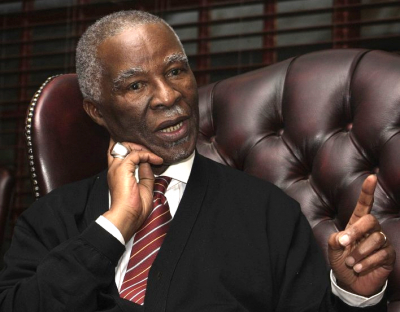 Former president Thabo Mbeki has released the following statement in reaction to the resignations of Mmusi Maimane, Athol Trollip and Herman Mashaba from senior positions in the Democratic Alliance.

I have understood from the statements made by the various leaders of the Democratic Alliance (DA), including Mmusi Maimane, that the current developments within the DA have to do with the continuing challenge of racism in our country.
In this context, I wish to emphasise that, consistent with our Constitution, all our registered political formations have an absolute obligation practically to contribute to the national effort to make ours a non-racial country.
It would be a matter of the greatest concern if it were in fact true that our country’s Official Opposition, the DA, is going through a leadership crisis because of a hegemonic ascendance of a racist tendency which seeks to assert policies to that end, thus to sustain colonial and apartheid social relations.
The millions of our people and our Constitutional order will gain absolutely nothing from any negative movement in any of our political parties towards policies based on racism.
The DA has an imperative obligation to reassure the nation, practically, unequivocally and transparently, that it is conducting and will conduct itself in terms of all its internal and public policies and programmes in a manner which truly helps to transform South Africa into a non-racial country.
This is an obligation which binds all the political parties which serve within our legislatures, without exception.
Together, these must ensure that as elected representatives of the people, they faithfully discharge their solemn obligation to contribute to the building of the South Africa prescribed in our Constitution.
Those who organise and act to frustrate the realisation of the goals detailed in our Constitution must understand that thereby they commit a criminal act against both the ordinary people in our country and the post-apartheid legal order which has sought to defend the interests of all our people without regard to race, class, gender, sexual orientation or creed!

More in this category: « Xenophobia in South Africa and the Travesty of Regional Cooperation. Cyril Ramaphosa: The violence perpetrated by men against women remains a scourge and national crisis that we must act urgently to end. »
back to top