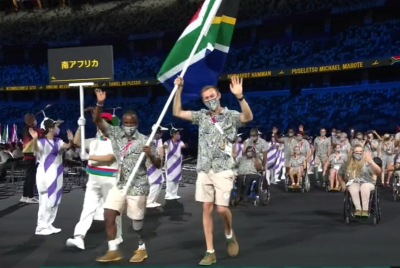 This year's rescheduled Games will see a 34-strong South African contingent vie for glory in Japan with the Paralympics scheduled for 24 August - 5 September.

Both Du Toit and Montjane are competing in their third Paralympics, having represented Team SA at both the London 2012 and Rio 2016 Paralympic Games. Du Toit struck double gold in Rio when he took the T37 100m and 400m titles. Montjane meanwhile is in a rich vein of form, with the 35-year-old reaching the singles final at this year's prestigious Wimbledon tournament.

The president of SASCOC, Barry Hendricks, said he was delighted for both Du Toit and Montjane, affectionately known as "KG".

"Both athletes are inspirations, not only in their own communities and sports, but are internationally respected as well. It was an incredibly difficult decision to arrive at but ultimately we are happy that Du Toit and Montjane will share this honour.

"The Team SA Paralympic squad has 34 athletes and all are wonderful ambassadors for their country. We have no doubt that they will bring pride to South Africa and having Du Toit and Montjane carry the flag is the perfect way to get the Team SA campaign going. Both embody the Paralympic values of excellence, friendship and respect and are fully deserving of the honour," Hendricks added.

More in this category: « Tokyo 2020 Paralympics under way with colourful and powerful opening ceremony. Anruné Weyers and Ntando Mahlangu lands Team SA two old medals in Tokyo. »
back to top