Tokyo 2020 Paralympics under way with colourful and powerful opening ceremony. 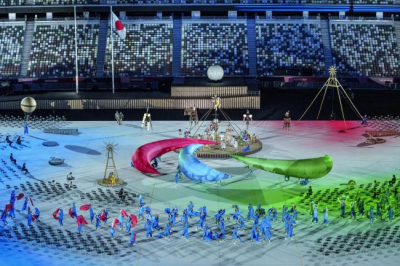 "Paralympic athletes know that no matter which way the wind blows, its power can be harnessed to move forward. They know that by being brave and spreading their wings, they can reach extraordinary heights."

The words of Tokyo 2020 organisers, as the Paralympic Games finally opened, 364 days later than planned and after a year of the utmost difficulties.

Five years have passed since competitors said 'tchau' to Rio. At long last, it is the turn of the Paralympics to bid 'konnichi wa' to Tokyo.

The Games began with an opening ceremony full of colour and celebration interjected with a touch of poignancy, a concept of 'We Have Wings' which organisers said was intended to raise awareness of the courage of Paralympians.

"I cannot believe we are finally here," said Andrew Parsons, president of the International Paralympic Committee, in his opening speech.

"Many doubted this day would happen. Many thought it impossible. But thanks to the efforts of many, the most transformative sport event on earth is about to begin."

These Games will feel different to those of previous times. But as the Olympics showed just a few weeks ago, the power of sport will prevail.

It has the power to create "winds of change" too.

Most of us haven't been through an airport in nearly 18 months, but Tuesday's opening ceremony - at Tokyo's National Stadium - transported us to Para Airport.

There we met the Little One-Winged Plane, convinced she cannot fly because she has only one wing. Gradually, she has a change of heart, inspired by the displays of resilience around her, and grows enough in confidence to take off on her own journey.

No crowds were there to watch the opening ceremony, as will be the case throughout the Games, but it was a still a show, a cauldron of colour and celebration.

There were sombre moments, too, reflective of the events of the past 17 months. A rescue worker was among those to carry the Japanese flag into the stadium, while the Paralympic flag was handed over to eight key workers who supported the people of Japan in their day-to-day lives during the Covid-19 pandemic.

Of the 714 cast members performing in the opening ceremony, 166 have impairments. In Japan, it is hoped the Games will act as a catalyst for change in societal attitudes towards disability in the country.