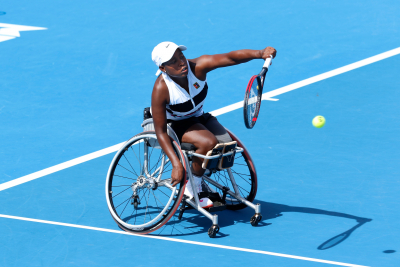 South African world-renowned wheelchair tennis star, Kgothatso Montjane, who carried the South African flag in the Opening Ceremony, is seeded number six in the women's singles event and has been drawn to face Saki Takamuro from Japan in the first round.

The 35-year-old Montjane should meet Dutch world number 3 Aniek van Koot in the quarterfinals if all goes according to plan.

This year's event will be Montjane's fourth Paralympics, after securing a wild card position to Beijing 2008 and qualifying on merit to London 2012 and Rio 2016. The world number 6 will attempt to achieve what no African has done before – win a medal in wheelchair tennis.

"I've always said in Tokyo I just want to aim for a medal - it doesn't matter which colour - and after my performance at Wimbledon I don't see why it's not attainable," said Montjane.

World number 35, Mariska Venter, who will be making her Paralympic debut in Tokyo, has landed in a tough section of the draw.

"Preparations are going well. We are slowly but surely adjusting to the humidity and heat. We still have two more days to train, and I have a good feeling that by Friday I will have a great feeling on court," commented Venter.

Meanwhile, in the men's division, world No 31 Evans Maripa, opens his account against Austrian world No 51 Thomas Flax. Should Maripa prevail, he could come up against Spanish 13th seed Daniel Caverzaschi in the second round and Belgian third seed Joachim Gerard in the third round.

"My training is going well. I have been adjusting well to the extreme temperatures and court conditions. Now, it's to hit my targets and to create opportunities in the matches," said Els.

"All I can do is to focus on what is in my control and give it my absolute best.

The event will see the world's top players contest six medal events when the eighth Paralympic Wheelchair Tennis Event gets underway on Friday to 4 September at Ariake Tennis Park.

More in this category: Tokyo 2020 Paralympics under way with colourful and powerful opening ceremony. »
back to top