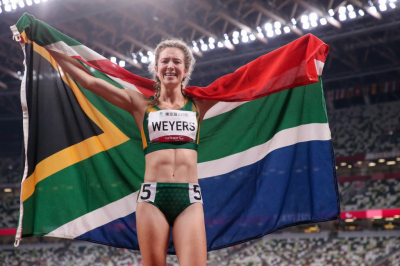 According to the official account for the South African Tokyo Paralympics team, Weyers won the team’s first medal after claiming victory in the women’s 400m final.

Weyers completed the race in 56.05 seconds.

According to the International Paralympic Committee (IPC), "classification is the cornerstone of the paralympic movement, it determines which athletes are eligible to compete in a sport and how athletes are grouped together for competition."

As a result, athletes are grouped by the degree of activity limitation resulting from their impairment. The IPC compares this to grouping athletes by age, gender or weight.

Anruné Weyers, for example, falls into the T47 category, which according to the IPC classifies her among those whose upper limbs are affected by limb deficiency, impaired muscle power or an impaired passive range of movement.

Meanwhile Sports, Arts and Culture Minister Nathi Mthethwa announced financial incentives for 2020 Tokyo Games medal-winning athletes and their coaches on Friday. The incentives will be to the tune of hundreds of thousands of rands.

He was speaking at a media briefing to provide clarity about his department’s plans to provide incentives for Paralympians and Olympians who delivered outstanding performances at the games.

The allocated amounts are as follows:

In the same lomg-jump event on Saturday, South Africa's Puseletso Mabote finished 9th with a distance of 5.18.

More in this category: « Du Toit,Montjane named SA's flag bearers for Tokyo Paralympics. Afghanistan's Paralympians arrival sends out a 'message of hope'. »
back to top