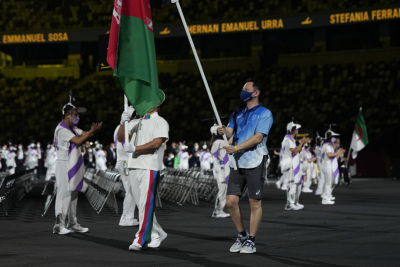 Zakia Khudadadi and Hossain Rasouli made it to Japan after leaving Kabul in a "major global operation".

They were welcomed to the athletes' village by a party including IPC president Andrew Parsons.

"As you can imagine, the meeting was extremely emotional," said Spence.

"There were lots of tears from everyone in the room. It really was a remarkable meeting."

Khudadadi and Rasouli were among thousands of people unable to leave Afghanistan after the Taliban seized power before the pair were evacuated.

"We always knew there was a remote chance both athletes could participate at Tokyo 2020, which is why the Afghan flag was paraded at Tuesday's opening ceremony."

The flag of Afghanistan was held by a volunteer at the opening ceremony.

On Wednesday the IPC said the pair were in a safe place. Parsons has since revealed that they spent a week in France at the National Institute of Sport Expertise and Performance, the French sports ministry's high performance training centre, on their way to Japan.

"Twelve days ago we were informed that the Afghan Paralympic Team could not travel to Tokyo, a move that broke the hearts of all involved in the Paralympic Movement and left both athletes devastated," said Parsons.

"That announcement kick-started a major global operation that led to their safe evacuation from Afghanistan, their recuperation by France, and now their safe arrival in Tokyo.

"Our number one priority has and always will be the health and well-being of both athletes."

"Throughout and going forward the most important thing is Zakia and Hossain's physical and mental wellbeing. They will have the full support of the Paralympic family while with us," added IPC Athletes' Council chairperson Chelsey Gotell.

Khudadadi, 23, will be the first woman ever to represent Afghanistan at the Paralympics.

She will compete on Thursday in the women's K44 -49kg weight category, while Rasouli will line up in the heats of the men's 400m T47 athletics event on Friday.