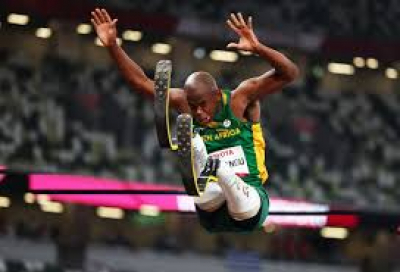 Minister of Sport, Arts and Culture, Nathi Mthethwa, has congratulated team South Africa for winning three medals so far at the Tokyo Paralympics 2020.

Athletes Anrune Weyers and Ntando Mahlangu emerged as the first pair to collect gold medals out of the 38 athletes who are currently representing South Africa at the 2020 Tokyo Paralympics.

"We are extremely proud of Team South Africa and what they have achieved so far at the Paralympics. This is a clear indication that there are no limits when you set your mind to something. We believed they could and they did. Furthermore, we will continue to support them on their ongoing journey," the Minister said.

In the men’s 200m T61 sprint, Mahlangu was able to collect gold and broke his previously self-set world record after finishing. First clocking 7.17.

He was then followed by both Leon Schafer (Germany) and Daniel Wagner (Denmark) who finished second and third respectively.

"I have been competing for eight years and this is my first medal. I am overwhelmed. I couldn’t have asked for a better race, a better guide, better preparation. I’m very thankful for how things went down," Coetzee said.

The Minister said he was excited to see the athletes putting all efforts to increase the medal tally.

"We are watching very closely what is happening at the Tokyo Paralympics and we are excited to see that the athletes are putting all efforts to increase our medal tally. We wish them success and we are looking forward to celebrating more of such achievements," the Minister said on Monday.

I had to make time to congratulate #TeamSouthAfrica for flying the South African flag so high at the #Paralympics. Gold medallists Ntando and Anrune are joined by silver star Louzanne Coetzee who just gave us our 3rd medal. We are so proud of you! Best wishes to all our athletes. pic.twitter.com/7wUmsi5YwH

The rest of Team SA Results:

Men’s Individual 1/8 elimination: Shaun Anderson lost to Helcio Luiz of Brazil, in a shootout (6-9) after the scores had been locked at 123-123 after five sets.

More in this category: « Afghanistan's Paralympians arrival sends out a 'message of hope'. Patrick Selepe makes history at theTokyo Paralympics. »
back to top