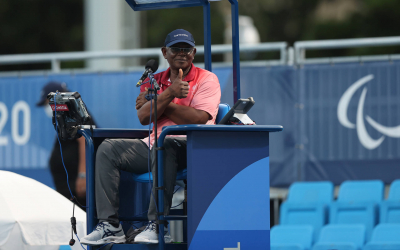 On-court inspiration comes in many forms. For some, it may be witnessing a player beating the odds to overcome a superior opponent; for others, it will be a watching a shot struck so beautifully it draws audible gasps from the stands. And then there are those inspired by the sight of an official with a prosthetic limb playing his part in the biggest event in world sport.

South African umpire Patrick Selepe is the first person with a disability to serve as an official at a Paralympic Wheelchair Tennis Event. It is the latest milestone in a journey that has seen him advance the sport from its very arrival in South Africa, having dedicated himself to wheelchair tennis as a player, coach, administrator, development officer and mentor – not bad for someone who had never so much as held a racket before losing his left leg in 1996 at the age of 19.

"You grow up being a normal child like everyone, running around and playing all the sports your love at an early age," Selepe recalls. "Then, boom, you're diagnosed with bone cancer – osteogenic sarcoma. That was 1996, and I was still in matric [the final year of high school]."

Selepe's left leg was amputated above the knee, and today he walks with a prosthetic. "I was hospitalised for quite a long time, and it was difficult for me to accept, to start learning to live the way I am and finding out what can be changed to adapt into the situation, to move on with the situation and make the best out of it."

Moving on was not easy. Selepe had no previous contact with people with disabilities, and no obvious support structure once he left hospital beyond his family and friends.

"I always say, family and friends' support is more than medicine," he says. "I am lucky, because I got that support from the community. That made me open up to so many things.

"It was a totally new thing, knowing what can and can't be done, and starting to learn what I could do in sport, because I love sports. I started learning that I can still play some sporting codes, and I had to start from the beginning. But believe me, it was difficult – not knowing how to approach people with disabilities, where to go in order to start sport.

"But in the end, it came to me: the journey that I've walked, as difficult as it was, I should try and make it easier for the next person. It might be just by giving the information that I didn't have, or motivating them in terms of what they can do, and discussing what options they have."

Selepe's first port of call was athletics, having been inspired by the exploits of Fanie Lombaard, a South African Paralympic gold medallist and record holder in the discus, shot put, and javelin. After finding a local para-sport initiative in his home province of Pretoria, he got involved in wheelchair basketball and took to the track and field.

"I didn't have the right equipment to do shot put or javelin – the only thing, skinny as I was then, was to do the high jump. Hop, hop, jump. The South African record was 1.52m, which I broke – and then people started asking, 'Who's this guy?'"

Newspapers and television crews came knocking, and Selepe admits the spotlight provided a huge boost to his self-respect, and the respect from his community. This, he says, is the power of sport.

As his contacts in the world of disabled sports grew, Selepe was approached to help a new initiative to introduce wheelchair tennis to South Africa in 2003. Buoyed by the wheelchair movement skills he had acquired from basketball, he picked up a racket and set to work improving his strokes, learning and coaching at the same time.

"I remember there was a guy from Netherlands came via the ITF, John Noakes," Selepe recalls. "At that time I was one of the founders of Wheelchair Tennis South Africa, trying to form a structure for wheelchair tennis. I hadn't played tennis before, but when he came I was doing my Level 1 coaching certificate!

The twin tuition proved a pathway to success. Selepe quickly took to the sport and rose as high as No. 60 in the UNIQLO Wheelchair Tennis Tour world rankings in May 2014, as well as playing on the South African World Team Cup squad that he now captains.

"I always say to the young ones, motivating them, that I never travelled out of my country until I travelled for sport," he said. "The first passport that I had in my life was because of sport. I'd never even taken a local flight – my first flight was to Holland. KLM, I'll never forget!"

With a self-deprecating sense of humour, his warm, infectious laugh, and a view on the world forged in hardship, hard work and the determination to make life easier for those who follow in his footsteps, Selepe is an inspiration – and, it seems, a hard man to turn down. Leon Els, the 33-year-old South African who played at his second Paralympic Games in Tokyo, recalls the role he played in bringing him into the sport.

"I was in the gym one day at university, and a guy approached me to ask if I do any wheelchair sports," recalls Els, a nationally-ranked 400m hurdler with aspirations for a rugby career, before a motor accident in 2008 left him paralysed at the age of 18.

"It was two years after my accident, and I said no – I didn't really know where to go. He said he knows a guy with an extra tennis chair, he can call him right now and we could have a hit. And after having a hit with that guy, Patrick called me. He said, 'We heard you're keen on wheelchair tennis,' and he actually recruited me right there for my first tournament."

With his wide-ranging roles in South African wheelchair tennis, all the players know Selepe. As he walks through the Ariake Tennis Park grounds, Rio 2016 gold medallist Gordon Reid whoops from a buggy heading to the practice courts, mimicking the 44-year-old's happy greeting. A few quick words before the buggy departs, and wide smiles all round.

In his playing days, Selepe was a contemporary of the likes of Shingo Kunieda, Stephane Houdet, Stefan Olsson, all players he now watches from the line judge's position or umpire's chair after accepting he was not bound for the upper reaches of the world rankings seven years ago.

"You cross over and become a coach," Selepe said of his options after curbing his ambitions for the top. "And I'd been a coach, but I always loved the officials, and being in charge on court. Whenever a player might be crazy, crying, or complaining, the official is there to help, even though some of the players see it differently. After the tournament, they all forgive me, they always smile and we're good. That's when I learned that I can do this."

One year after hitting his career-high ranking, Selepe made history as the first person with a disability to earn an ITF White Badge officiating qualification in 2015. Soon after, he joined the officiating team for the Wimbledon Qualifying tournament, and in 2017 made more history as the first chair umpire with a disability to officiate a Davis Cup tie in South Africa, the same year he received the inaugural UNIQLO Spirit Award in recognition of his ongoing commitment to wheelchair tennis.

"I'd never been on grass until that first time in 2015," he said of his Wimbledon officiating debut. "Believe you me, it was another level of experience and learning, because you are around international officials with more experience. It was my first time on grass, and I did it again in 2016, which was better than 2015. And now, I am here."

As we talk, Selepe regularly returns to the bedrock of his story: the support of his family and friends. A father to three boys, he knows he is indebted to his wife and sons for allowing him to follow his passion, even when it takes him on a 28-hour journey to the other side of the world, while he also praises Tennis South Africa for helping him get to where he is today.

And support works both ways, with Selepe's driving aim in life to change perceptions about people with disabilities leading him to the US-based Global Sports Mentoring Program, which has honed his vision for broadening athlete development to encompass sporting, educational and pastoral mentorship.

"I take this as a challenge," Selepe said. "I've walked the journey, but what am I doing with the journey? Same as when I was playing wheelchair tennis and developing wheelchair tennis in South Africa, with the little experience I have as a player and a coach, another challenge is to take the experience that I have and share it with people with disabilities. You might be sitting in a wheelchair, but believe me, you can be a line umpire.

"I think I'm an inspiration to most people with disabilities, and it's easy for me to practice what I preach. I've done it, and I believe it. Others will believe by doing as well. I'm working with Tennis South Africa to give back and get more people an opportunity to come and officiate. You can see journey may have started, but the journey does not stop."

For now, though, Selepe is living out a long-awaited ambition at the Tokyo 2020 Paralympic Games.