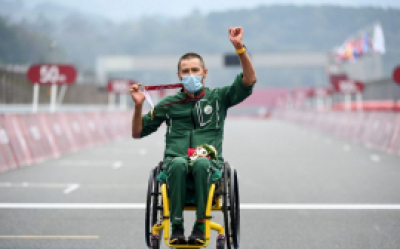 It was South Africa's fourth medal of the Games and the country's third gold.

Earlier, the race almost ended in disaster for Du Preez after another competitor swerved in front of him.

As he thundered down the main straight at the Fuji Speedway circuit, and across the finish line to complete the first of two 8km loops, a para-cyclist finishing a different classification race, swerved in front of him to exit the track on the right.

"I saw him so late, I swerved and tipped onto two wheels, otherwise I would have hit him properly. My arm touched his wheel ... that's how close it was. I was flying," Du Preez told the Team SA website.

The famous track, nearly two hours outside of Tokyo, is known in motorsport as a fast track, and hosted the Japanese Grand Prix until 2009. It also has one of the longest straights in motorsport, at 1.475km and has seen its fair share of drama over the years.

But with the disaster averted, Du Preez continued on his dominant way to the gold medal. He had assumed control of the event from the start and by the time he raced past the pits and under the big timing board after the first of the two laps, he had opened up a 27-second lead on his closest challenger Fabrizio Cornegliani, of Italy.

The next time SA fans saw Du Preez go under the home straight timing board it was it 8km later, and this time less dramatic. He'd put another 88 seconds between himself and Cornegliani, to take the gold medal in 43min 49.41sec, some 1:55.15 sec clear of the Italian. The bronze medallist, Maxime Hordies, was 3:11.82 behind.

"I can't explain it ... it’s very special," Du Preez said. "I was in tears after I crossed the line, but tonight I think I'm going to have an even bigger cry in my bed."

Pieter du Preez, who previously broke the 10 000 metres T51 world record and went on to set new African records in the 200m, 1 500m and 10 000m, pocketed his 5th title by finishing at 43min 49.4sec, beating both Fabrizio Cornegliani (Italy) and Maxime Hordies (Belgium).

"I am elated with the impressive performance of our athletes at the Tokyo 2020 Paralympics. What we are currently witnessing is a sterling performance by our ambassadors in sport and I am convinced that we are destined to make a remarkable finish in the world rankings.

"I wish the remaining athletes the best of luck and I look forward to more celebrations," the Minister said on Tuesday.