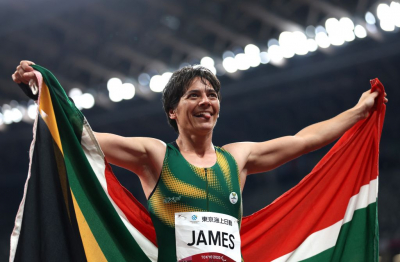 Sheryl James of SA celebrates after winning bronze in the Women's 400m T37 final on day seven of the Tokyo 2020 Paralympic Games at Olympic Stadium on August 31 2021 in Tokyo, Japan. Photo Credit:Getty Images.

James won the country's fifth medal at the Tokyo Paralympics and the first bronze of the Games.

Running in lane six, the 35-year-old crossed the finish line third at a wet and rainy Tokyo, running a personal best of 1:03.82.

"It’s an honour to compete against some of the best runners in the world, and I had great fun out there," James said.

In other events in the afternoon session, Anika Pretorius finished fifth in the women’s T13 100m in 12.33 seconds, clipping 0.08 off the personal best she had set in the heats earlier in the day.

Fellow sprinter Dyan Buis, who won gold at the 2016 Rio Games, fell short in defence of his title, taking fifth position in 51.39.

After seven days of competition at the Tokyo Games, the SA team were lying 27th in the overall table with five medals (three gold, one silver and one bronze).