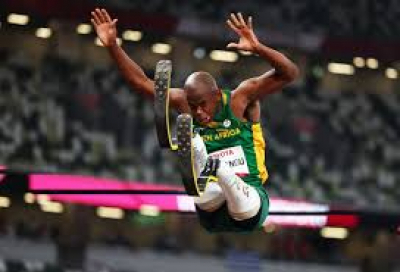 The 19-year-old, who took victory with a world record in the T63 long jump last weekend, sprinted to a second gold in the T61 200m, winning in a time of 23.59 while easily beating Britain’s two-time defending champion Richard Whitehead in the process.

That was South Africa’s fourth gold of the Games and at the time, lifted the nation to 28th on the Tokyo medal table.

It was five years ago that Mahlangu announced himself on the Paralympic stage as a plucky 14-year-old, who had only just started out in athletics, claiming silver over the same distance.

This time he was the outright favourite going in as world record holder and world champion, and he duly delivered.

In an especially poignant moment on the podium, 45-year-old former champion Whitehead was the one to present his teenage successor with the gold medal.

"Coming into this race I knew that anything was possible," said Mahlangu. “I knew he was not going to give it to me very easily and that’s what he did. In the start, he gave me a go, and I am really happy.

"I have to give it to him, at the age of 45 to be able to do that. What an amazing athlete. And what a way to end a career.

"He is a great athlete and I am actually honoured to run against him."

Asked what it means to be South Africa’s only double gold medallist of the Games, the gracious Mahlangu added: "These gold medals aren’t mine… I hope these medals can bring a lot of positivity back home. Coming into this competition, I had a lot to do – not running for myself but for Team SA.

"The gold in the 200 wasn’t Ntando Mahlangu’s – it was for the people back home. I’m very excited about the journey I’ve had, from 10 years old [when he got his first prosthetic legs] until now. I’m very happy about the man that I’ve become over the years.

"It’s a feeling I can’t describe with words. I’m very chuffed and now I can go rest for a bit so I’m very happy."

Just one race before, Tebogo Mofokeng powered to a new African record in the T62 400m. His time of 50.09 just saw him missing out on a medal, finishing fourth in the race won in dominant fashion by Germany’s Johannes Floors in 45.85.

SA’s Daniel du Plessis finished seventh in the same race in 53.56, while former Paralympic champion Charl du Toit’s time of 24.04 for fourth place in his T37 200m heat was not enough to see him through to the final.